crow with no mouth 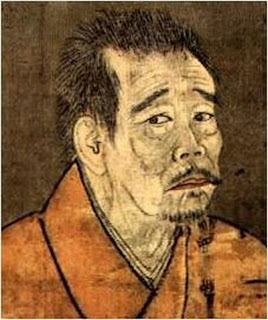 I wish I could convey, even a little, the pith and gist of Ikkyu, the mad zen monk also called Crazy Cloud. There is a sense, in the few reliable accounts of his life, of an improbable wholeness to him. In anecdotes documented in the temple records that chronicle both his enlightened activities, and the frequent scandals he enjoyed, there is this: a consummate practitioner and instructor of ikebana, of calligraphy copied across Japan, and the four line verse form he used for his startling naked poetry; a denizen of taverns raucous with "lower companionship", and a well known guest of brothels, where he fled when the "stink of zen", a term for the orthodoxy and piety he found as the head of Daitokuji, a revered temple in Kyoto, overwhelmed him. At the age of 77, Ikkyu fell ass-over-tea-kettle for a 20 year old blind girl, with whom he spent years. His writing about that affair, like all of his published verse, is naked, unsentimental, tender and unsparing. He clearly conveys the foolishness he felt, an ancient zen goat yoked to a beautiful young girl, but also a moving fealty and gratitude for her companionship. The poems of lust are as explicit and celebratory as any produced by Henry Miller or Allen Ginsberg.

This life, embracing long retreats to a hermitage, impressive benders in bars and brothels, disgust with religion and unsullied devotion to his own master, appetites equally large for both worlds, interior and back-alley, is amazing enough. That it was lived from 1394-1482 in feudal Japan, that he was the precocious son of an Emperor who often preferred the company found in rural taverns, that he received inka [the formal seal of recognition of enlightenment from his master, qualifying him to head a temple] , only to burn it when in his forties, disgusted with his temples' catering to the privilieged, seals my regard for him.

His enlightenment, brutally tested and tried by the lineage masters above him, occurred when he was walking a country road and heard a crow call.
When temple bureaucrats were searching for the often eloped Ikkyu, he'd say "Look for me in the Red Light district!"

This site is dedicated to Ikkyu Sojun, a placeholder for me to write about music few listen to, thoughts I have no business publishing, whatever else develops.