...and for solace the perspective of your own infinite life. 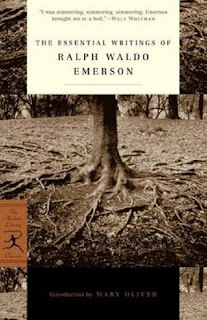 I am slowly, slowly, making my way through the staggering raison d'etre of this gentleman, who manged even his outrage and scorn with equanimity and articulate protest. He was Camus' sort of rebel in one sense-he lived so that his life was an act of rebellion.

Like millions, pole-axed by the passivity, depravity and pervasive retardedness in Washington, I return to the essential reality of politics and society that even a cursory read of history lays bare- it has always been so, and always shall be. Certainly a cause for cynicism; or for the small solace that comes to us, as Emerson says, when we locate hope [whatever hope is real and possible] where it belongs- in our perspectives being large enough to hold "...the shades of all the good and great for company" [ The American Scholar, 1837]. Suzuki Roshi called this "giving your cows a larger pasture."

The mind requires a larger pasture, the society suffers without a larger pasture. We have reached such an intensely claustrophobic state, such an impoverished imagination, such an enervated will, each of us, and all of us collectively, that these apes in power can pass as statesmen and legislators. The beat down of especially the last 30 years [the Reagan epoch is as good a marker as any] has been harsh on all of us-and on scholars, on whatever press remains, on genuine servant-leadership, on popular movements, and on the most vulnerable among us.

So this spectacle has sent me back to a focus on sanity, and Emerson will give you something to work with as pith and savvy as any zen man. Like this:

"The spirit of the American free man is already suspected to be timid, imitative, tame. Public and private avarice make the air we breathe thick and fat. The scholar is indolent, complacent. See already the tragic consequences. The mind of this country, taught to aim at low objects, eats upon itself."

If you have a minute, read those few sentences again. This was Emerson's address to a graduating class at Harvard in 1837. Where does this large pasture perspective spring from, for this leisure class intellectual invited to address the Harvard class? Here's a clue:

"Patience, patience: with the shades of all the good and great for company; and for solace the perspective of your own infinite life; and for work, the study and the communication of principles."

Beautiful! Emerson untethered [I'm speaking strictly of the Emerson of these insights] sees what ails us [intellectual and moral cannabilism], and what liberates us-keeping company with all the shades [big pasture mind], keeping principled, seeing our own infinite life.

Emerson, nobody's fool, is chugging towards his deservedly celebrated 1841 essay, Self Reliance, where we see the seeds tossed to a likely perplexed Harvard class fully cooked. Now he is, as are all free people, a dangerous individual. Imagine anyone on your current cultural radar insisting,

"Whoso [sic] would be a man, must be a nonconformist. He who would gather immortal palms must not be hindered by the name of goodness, but must explore if it be goodness. Nothing is at last sacred but the integrity of your own mind." [Self Reliance, 1841].

I don't know where you take your solace in this society ruled by whores and cut-throats, but you could do worse than consider what Emerson points to here- look to the integrity of your own mind, the solace of your infinite life.

Just wanted to say how wonderful this blog is, and lovely to see you writing about Emerson. Looking forward to reading more