Her Clothes and Ornaments 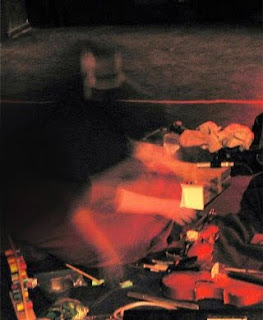 Whatever follows, in this appreciation of the music of Austin, Texas-based Vanessa Rossetto, it is a fact [not a rhetorical ramp for a cogent review] that I am nearly at a loss for words. If you leap from that admission to hear her self-released solo work for yourself, you might understand how my regard for Rossetto’s boundless creativity and singular sound-world can produce a real paucity of apt descriptors and adjectives. But it seldom works that way, so let me put forth a few of my responses to the wild imaginarium of Vanessa Rossetto, accessed through a run of five solo releases from 2008-2010.

It is a strange sound-world, however you get there: whether you arrive from the sphere of free improvisation, an area Ms. Rossetto is clearly intimate with, and occasionally evokes with her sometimes sere, sometimes emotive violin/viola sound; or musique concrete, the placeholder I find as useful as any for her last two solo releases; or field recordings, a means for Rossetto's effortless-sounding erasure of whatever thin membrane still exists in the foreground/background, incidental/formal sound gestalt of electro-acoustic music. Chamber instrumentation [Rossetto wields the violin, viola and cello on all five of the solo recordings] is coequal with kitchen clatter, the pervasive household menagerie of chirps, squawks and barking that emerge and recede in her domestic collage compositions, as well as barely controlled feedback squalls, and string dynamics that range from acerbic, mocking and dancing [cf. Billy Bang, Leroy Jenkins], to steady-state drones of serene equanimity [cf. Tony Conrad].

While I managed some comparisons, and could speculate further on influences, my opening assertion that Rossetto’s work occupies a singular and strangely description-elusive space, remains true. It isn’t finally the component parts [her timbral explorations on exceedingly familiar orchestral instruments, the integration of natural, environmental sonics, the overall shape of things] that impresses most. It is Rossetto’s joining of starkly dual sound worlds- compositional structure with almost off-handed improvisational gestures, the foregrounding of banal domestic sounds next to sober violin lines, the genuine collagist hand at work in this [and this is a superficial impression belied by repeated listens] seemingly kitchen-sink approach to sound art. I was at a loss for an adjective that would distill the shape of her works down to a single word; then I visited her My Space page, and saw Rossetto’s comic, but apt, self-description-labile. That’s it, however tongue-in-cheek her intentions-labile, conveying that word's sense of chainless energy and abandon, as well as the potential for brilliance.

Sound art will evince some eye-rolling no doubt, so be it. If the descriptor reads as precious to you, I assure you it will be immediately clear that Rossetto’s sound art is brilliantly spun from some of the most quotidian, low-fi sound sources available to a composer. It is as if you are hearing one of those Lynchian hyper-detailed/magnifying shots that startle us with the revealed world of activity going on just below our ordinary perceptions-instead of a blade of grass, or a decomposing ear, it is a plummet into one of Feldman’s beloved tapestry patterns. Here, Rossetto’s wild explorations reveal, is the cacophony and the occasional serenity and beauty that lies deep in the fabric of our domestic lives. It is sometimes as if she has tapped into a rainforest in her living room, rough-hewn and plangent sounds placed amid the pervasive element of string drones, a noise floor that seldom allows you to relax, much less bliss out, as every few minutes whatever sounds you’re fixed on morph, slide, collapse. Banal clatter yields to gorgeous harmonies, a pissed-off sounding parakeet leads to a few good measures of beautiful string threnody.

Here’s the risk in laying this out this way- it sounds overwrought, chaotic, more pastiche than assured, creative juxtapositions [cf. Zorn]. Not at all. Every one of these five releases is, overall, an interesting ride upon a first or second spin. For me, the appreciation for her structuring of the works came after multiple listens. The maturation I hear between Misafridal and Dogs In English Porcelain, separated by a mere year or so, is impressive. Rossetto clearly works like one who confidently occupies her own space, sensing that it is her DIY materials and unfettered imagination that limn that space.

I have quibbles about some of the episodes heard across these five releases-missteps to my ears, an occasional digression from an area [often, to be honest, her Conrad-esque drones] I’d prefer to hear sustained, the trying, monotonous sound of the acoustic turntables through some of PDD-NOS. But this is an amazing run of recordings, seldom lapsing into uninteresting music, and always startling the listener with the scope of Rossetto’s imagination. If I were to convey my enthusiasm much more concisely, it would be this last quality- Rossetto is improbably imaginative, curious and audacious, far from the settled, fully explored territories of some of her peers. She has been, for several years and a clutch of releases, incapable of boring me. There is nothing like this stuff, and if you should check it out, and wish to refute that claim, I’m all ears.

A few brief pointers for newcomers: if you’re especially drawn to collage/musique concrete, try Dogs…; if you are more interested in timbral/textural exposition for the strings [ala Leroy Jenkins], try any one of the three 2008 releases. Imperial Brick consists of seven improvisations for the viola. For reasons inarguably subjective, my personal favorite of those three is Whoreson In The Wilderness, a stunning work.

Among the many delights I take in Ms. Rossetto’s work are her song titles. The title of this article is one such, a lovely piece found on Whoreson In The Wilderness.