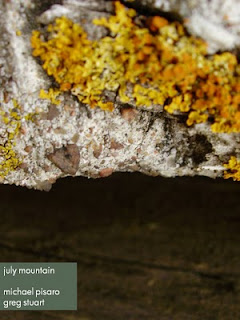 Repeated in a summer without end

Wallace Stevens, The Idea of Order At Key West

Composer Michael Pisaro’s July Mountain, a scored field recording that rewards repeated listens with numerous, gradual revelations, is named for the last poem published in Wallace Stevens’ lifetime. In my life-long regard for Stevens’ work , it is my response to the idée fixe sounded and shaped in this final poem, and beautifully realized in Pisaro’s composition, that sustains so many listens [I have heard July Mountain an improbable number of times since its release last month]. I have no idea what copula and conjunctions Pisaro intended between Stevens’ one sentence/ten line song of “patches and pitches”, and his meticulously constructed work for percussion and field recordings. What I hear in Pisaro’s July Mountain is the sonic realization of this:

We live in a constellation

Of patches and of pitches,

Not in a single world…

In Pisaro’s assemblage of strictly timed, crossfaded field recordings, sourced from visits to the California mountains he could credit as co-composer, and an array of percussion sounds created by frequent collaborator Greg Stuart, perception itself is articulated- that is, our perceptions as listener are brought forth as elements of the piece. For example, our ears may very well hear an airy, expansive setting for natural sounds and subtly limned sine tones and carefully placed piano chords. Repeated listens [and a reading of Pisaro’s notes detailing the precise and intricately mapped out graphic score] make clear a number of more nuanced acts of perception are put into play-the gradual erasure of the already illusory distinction between inside and outside sounds; the paradox of how complex and precise the parameters are for the assembled sounds, and yet how organic, unfussy and ventilated the piece sounds; the incremental manner in which the scored elements [Stuart’s layered percussion parts] subsume what is, at the outset of July Mountain, simply recordings of environmental sounds [the field recordings and the score flip within the gestalt of foreground/background]; and, delightfully, the inexplicable [don’t ask me to explain it] play of our perception of duration. I have noticed, reading numerous comments by listeners to this piece, that some report it is the shortest 21 minutes of music they can recall, and others averring time seems to either stand still, or that the pieces unspools endlessly, without beginning or end. Yes. I have been both startled at July Mountain’s brevity and abrupt conclusion, and its immersive and open-ended quality.

How does this articulate Stevens’ poem of perception?

The poet suggests from a certain vantage point, “Vermont throws itself together.” I think from this composer’s vantage point, “…the thousand odd, disconnected fragments…hanging and bubbling and dipping and flaunting”-the captured sounds of the wind, the incessant airplanes, the startling unanswered calls of children, the bracing entrance of a piano treated as a percussion instrument, the thickening, quickening clusters of Stuart’s timpani, bells and beats- all, masterfully ordered and arranged by Pisaro- “throws itself together”, and a work of seemingly simple elements and effects reaches that state so many aim for- a complete sound world is created, this one in 21 minutes [I thought many times, in this connection, of Nono’s magnificent Fragmente, which requires a sprawling 35 minutes to form its complete sonic universe]. There is a sense of all the sound sources being composed in a seamless fashion, so much so that [be honest], no one who has heard July Mountain prior to reading the score Pisaro provides could convince me they surmised the piece consists of 20 field recordings, 84 percussion events, and arduously timed fades and layering. No chance you’d extrapolate that from this airy ambience, “a summer sound/Repeated in a summer without end.”

I am thrilled to follow Pisaro’s development as a composer- I strongly encourage you to check out his catalogue of works prior to July Mountain. It is a joy to hear music that strikes such an impressive balance between the elements contained in a descriptor like “scored field recordings.”

Even more than the simple pleasure of listening, over and over, to July Mountain, is my growing appreciation for how intuitive a composer Pisaro is, how elegantly he links the easily obfuscated idea of Steven’s final poem [that we are always creating order from the chaos “of patches and of pitches”] to a sound world from his own vantage point. July Mountain is a universe in 21 minutes, and from my vantage point, Pisaro is creating some of the most vital and extraordinary music available to us today.

July Mountain is on the Engraved Glass imprint, where Jez Riley French attends to every detail of the music's presentation with great care.

We live in a constellation

Of patches and of pitches,

Not in a single world,

In things said well in music,

On the piano and in speech,

As in the page of poetry-

In an always incipient cosmos.

The way, when we climb a mountain,

Vermont throws itself together.