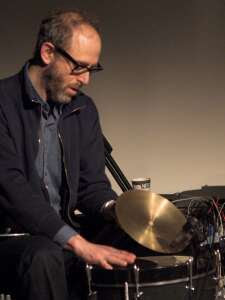 Jason Kahn’s 2009 solo work, Vanishing Point, has received some very positive notices, some stating it is his finest work to date. I am glad to revisit, nearly a year after its release, music that generated a significant amount of commentary for its occasion, as well as for its sonics, shape and specific musical qualities.
Its occasion is articulated by Kahn in the June 2009 press release found on the 23Five imprint web site; Kahn’s two year old daughter Louise died in 2007, just prior to his beginning the work on Vanishing Point.

“At first I thought of the title in reference to Louise’s passing, that point where she vanished from our lives, but on further reflection I came to see the composition as dealing with other vanishing points.”


The explicit reference in the title to a personal, unimaginable tragedy naturally generated comments about the impact such information had on those reviewing the work. I join those who were candid in saying Kahn’s personal loss cannot be detached from the listening experience, once that loss is known. How could it be otherwise with sentient beings? Equally I understand the point made by a few that Vanishing Point is an abstract work, without intrinsic reference to any specific narratives, and listeners who hear affective elements such as grief or loss are engaging in Rorschach projections - are, in other words, essentially self-deluded. Coming from a background in clinical psychology, I have to remind the latter group that Rorschach inkings are intentionally ambiguous [abstract], and that the viewers responses are not correct or deluded, but a potent measure of the thinking and feeling life of the respondent. Granted, the Rorschach elicits such information about the respondent precisely because they are offered without a framing “story” [at least theoretically]. I elaborate on this point because I am always nearly as interested in what the listener brings to a work as I am the technical and formal aspects of the work itself [the latter, to be honest, generally pales in juiciness to the former].

Once you embark on a number of close listens to Vanishing Point, whether you hear grief’s powerfully emotional motivic force at work in its 47 minutes of boiling down and incremental subtraction of elements or not, what may become of equal interest is what Kahn is referring to when he says the composition is “dealing with other vanishing points.” Besides the overarching, inexorable pull toward a horizon of total self-erasure, that is.

Vanishing Point is a mighty cloud at its onset, thickening and layering skeins of agitated cymbals, synth hiss, vaguely aeronautic droneage and a full color spectrum of noises, the principal hues to these ears being white and pink. Drawing this storm down with great patience and nuanced decay, it is startling what occurs with one’s sense of time. My analogous experience, at least the chief one musically, would be the suspension of time experienced in Eliane Radigue’s best works. Similar to the sound world of Radigue, there is the illusion of little development for vast stretches of time, a sense that the music is without momentum, advancement or event. This is quickly dispelled with a few repeat listens, by which you realize how unbelievably detailed and eventful Vanishing Point is, how subtly the acoustic and electronic elements are braided and entwined, and how the piece requires every minute of its duration to as subtly advance towards its own subtraction.

I have been listening to Kahn’s work, solo and collaborative, for six years. Reflecting on Vanishing Point’s reverse osmosis, and how skillfully Kahn always conveys, for me, a sense of the transitory nature of all stuff, I revisited a review I wrote of Zirkadia for Paris Transtlantic in November 2005. While Zirkadia is a trio date, with Kahn joined by Tomas Korber and dieb13, I nonetheless heard a similar quality of transience.

"...overall, Zirkadia subscribes to the wabi-sabi aesthetic: nothing lasts/nothing is finished/nothing is perfect. The spirit is captivated by the sound of decay, the fleeting, the transitory... Zirkadia is made to fade, and it is lovely."

I hear that same spirit in Vanishing Point, and believe I would even without the disclosure of Kahn's terrible loss. I heard it as well in his under-rated solo release from 2005, Sihl, a series of shorter pieces inspired by Kahn's walks along the Sihl river in Zurich, near a studio he was working in at the time. Kahn said he was struck by the laminal pace of the muddy river, and one walk brought this thought;

"At some points during the summer, the Sihl even seems on the verge of drying up! [...] Each day on my way to the studio I walked over a bridge crossing the Sihl. I often stopped for several minutes and observed the Sihl's condition. Over time I began to feel an affinity with what I was trying to do with sound, and the presence of the Sihl."

It is a great pleasure to follow over the years an artist's reckoning with the most ordinary facets of nature; when it is the transitory and fragile facets of nature reckoned with, a slippery slope lies ahead- treacle, pretension, sentimentality, literalness. Kahn avoids these traps, composing with sufficient abstraction and ambiguity, without sacrificing the felt world, to leave space for the listener to inhabit and respond. This makes Vanishing Point a tour de force, a beautiful example of what zen teacher Katagiri Roshi called " a letter from emptiness."