Work out of your work 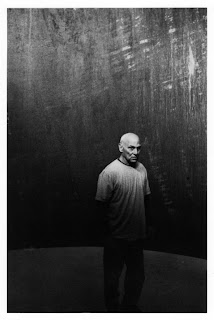 Work out of your work.
Don't work out of anybody else's work.

I just saw this photo of Serra on a music site and it's enough to launch a post. What a rigor he conveys. Serra is near Cape Breton, or used to be, an unsparing enviornment, perhaps the landscape form of Serra.

He has a few good pieces here, one in the Walker Art Center sculpture garden bearing the scarring of our seasons. Nothing as immersive as those improbably huge works in New York and elsewhere.

Doesn't fuck around. Says about rigging, you can become a master rigger, but there's no book on rigging.

Works out of his own work. Fantastic zen scowl, his physiognomy completely congruent with his steel plates, poles and whorled metal.
Posted by jesse at 11:56 PM