danger under the rainbow 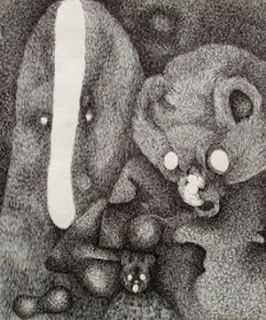 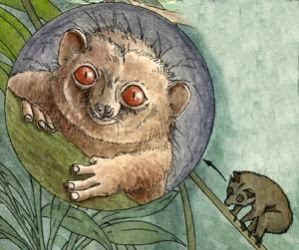 You are well within reason to ask why a consideration of two of the artists on Graham Lambkin's Kye Records label [Lambkin himself, and Belgian composer Moniek Darge] should be headed by the odd menagerie pictured above. I will return to that.
Suffice it to say for now I regard both Lambkin and Darge as sui generis sound artists in any menagerie you place them in; and having spent a fairly significant amount of time immersed in the D.I.Y.- concrète of the four Kye releases I own [at this writing, there are six releases in the Kye catalog], I have come to hear their respective works [two by Ms. Darge, two by Lambkin] as not simply owning over-lapping ideas and approaches, but also, at times, a genuine symbiosis.
As Darge was born 20 years before Lambkin, the issue of influence is self-evident. The time frame of the Darge compositions Lambkin released in 2009, Soundies (selected work 1980-2001), bookend Lambkin's life from his middle school days, to the demise of his ten year [1992-2002] musical project The Shadow Ring.

Between 2001-2009, Lambkin has released three of his own solo projects on Kye in very limited editions, carried along by the whisper stream of music bulletin boards, blogs and a few write ups in the few places that bother. In 2009 and 2010, Lambkin issued the Darge works, the aforementioned Soundies, a sampler of earlier works ranging from the performative to Darge's strange concrète pieces consisting of tapes, animal glossolalia, and acoustic instrumentation. Crete Soundies, released this year, documents the three years Darge spent working with intermedia events in Crete; essentially collages of location recordings, shaped and edited by Darge, they share with Lambkin's Kye releases a number of common elements.

So what is the Kye ethos I hear, in works separated by as many as 30 years, created by a Belgian who studied music theory and violin at the Music Conservatory of Bruges, and a fellow who formed a band at 19 with his mates that integrated text, folk musics, cracked electronics and whatever else struck their restless fancy?

Well, there is the D.I.Y.-concrète, a perverse alacrity for sound sources and placements that disrupt the flow we anticipate from the antecedents of concrète; Darge has a piece from 1980 entitled Sand that is all contemplative, steady-state drone and sparse percussion shattered by an "audience participant's" vocal outburst; Lambkin has developed this discontinuous continuity to a degree that every work of his is replete with surprising, sudden and deliberate disjunctions and redirections. Stately, lachrymose violin recitals are slashed through with cackling and seemingly derisive laughter; from time to time a man is heard sobbing like a child, or snoring, or breathing in labored rhythms, while an aria floats on the air; and, to allude to the menagerie pictured above, both Darge and Lambkin integrate a considerable degree of animal sounds into their works- and not merely the by now de rigueur birdsong and riven rhythms of streams found in most field recordings. Theirs is the more complete approach to creature language- grunting, rutting, shrill cries and plangent, nasal honks, creature sounds that serve less to elicit serenity, than to convey the chaos of the babel of tongues we hear around us all the time.
There is also the shared approach to recording quiet sounds in a way that makes them hyper-real; small, quotidian noises [water running, baths being readied, ice cubes clinking, vocal aspirations, the lexicon of the throat, the distressing intimacy of listening to a stranger's weeping, houses creaking,and the ghost sounds of the inanimate world settling, groaning and whispering], recorded in a way that, again, subverts the process of the electro-acoustic antecedents that have clearly inspired Darge and Lambkin.

Darge has a piece from 1983, entitled Fairy Tale, that has a section of vocalizing that is virtually indistinguishable from the gamut of human vocal sounds found in Lambkin's softly softly copy copy [2009], Salmon Run [2007], or his amazing duo collaboration with kindred spirit Jason Lescalleet, The Breadwinner [2008]. These are alarmingly intimate vocal sounds, especially upon first hearing them- unmannered and emotive, but often unnervingly devoid of a context or narrative in which to place them, mostly for our own comfort. Darge and Lambkin share a penchant for unsettling juxtapositions, though Darge's work has closer ties, formally, to early experiments in electro-acoustic/concrète compositions.

So there is, in certain moments of disjuncture, in some of their improbable sound eruptions and fissures, a real simpatico between their respective sound worlds. I think Lambkin goes places much wilder, in a literal sense, than Darge. In his raw assemblage/collage working method, Lambkin has developed a startling gift for joining jaw-droppingly gorgeous material with what lies beneath the boards, the sounds of grief, anxiety and apprehension peeking out from under the skirts of sonorous chamber music and piano gravitas. There are amazing moments of this sort of yoked, muted anxiety and pleasing melody throughout his solo works. The concluding 10 minutes of softly softly, a long exhalation of back-masked tapes, a looped vocal aspiration, a funeral piano arpeggio, looped and phased subtly as it flows to the sound of water and silence, is improbably beautiful. Lambkin can unnerve and assuage within a few moments, and you never hear it as manipulative, as much as issuing from a complete sound world Lambkin has imagined and realized with the most ordinary tools- the body, the breath, the house, the creatures around us, the sound of danger just under that rainbow. 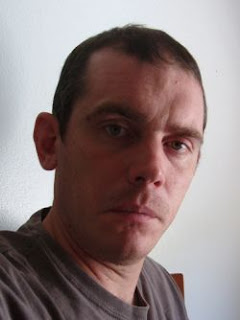 Besides documenting his own and others' sound projects on Kye, Lambkin has recently published a collection of his drawings, Dripping Junk, as well as a collection of his poetry and lyrics, Dumb Answer To Miracles. Both texts are available from Penultimate Press. I have not read these, so cannot comment. I do know Penultimate Press is the imprint of Melbourne-based Mark Harwood, who once ran a lovely label of new music called Synesthesia.

So what of the creatures atop this page? They are evocative, for me, of Lambkin's sound world.
The chiaroscuro critters on the top are by Lambkin, a work entitled Faces.
Their doppelganger just below is a primate seldom seen outside of Africa. They are known variously as potto, or, by the English-speaking in Africa, as softly softly.


The Kye releases discussed are:

For further information about the activities of polymath Moniek Darge, visit her site, the Logos Foundation.

To contact Graham Lambkin about any of his audio or visual works, write him at hawkmoths@yahoo.com

To obtain The Breadwinner, and to inquire about the available Kye releases, contact Erstwhile Records.


The phrase danger under the rainbow is the title of this Lambkin painting: 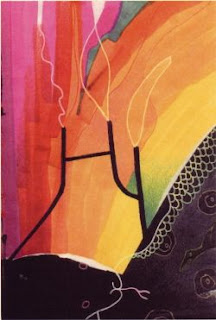