In ideal circumstances there is no unique authorship 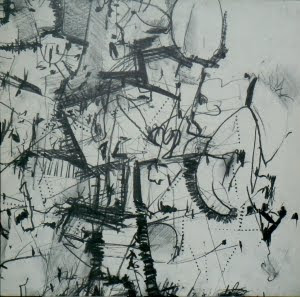 I really don't sweat my inability to distinguish the what or whom of collaborations like the one heard on Tomas Korber and Ralf Wehowsky's Walkurnen Am Dornenbaum. I am fairly surrendered to the ambiguity and the erasure of discrete roles this duo achieved, the result of their three year exchange of sound files drawn from basic material created over several days of playing together in 2006. This hasn't always been the case in my history of listening to difficult music. Walkurnen Am Dornenbaum sounds like interactive concrète, the signifiers of improvisation and composition, not to mention authorship, rendered irrelevant.

Wehowsky aims for this, as he said in a 2005 interview- In ideal circumstances there is no unique authorship, no separation between composer and performer, and a constant exchange of ideas and musical material. Hard on the ego. Happily, collaborator Korber seeks these sorts of confrontations, subsuming his guitar-based sounds within the duo's joint chopping, mixing, transpositions of speed and source material, and general sonic fuckery. The six tracks comprising the whole are little more than suggested demarcations, as Walkurnen lurches and reels through myriad micro-structures, fun-house events and dramatic crescendos that gasp and expire into barely audible hiss. This is a fantastically shaped, raw and ragged collage. Attuned specifically to its striations of ideas and details, you'll hear many of its musical cells reiterated and echoed, a snip of sound disappearing, then foregrounded with added distortion, oscillation, mangled leitmotifs, even recurring themes. There are wisps and whips of thin ghost tones, wheezy Carnival of Souls organ chords, saturated noise and moments of sustained serenity.

It is easy to imagine there must be some sort of back story dish in the creation of a work drawing on equal parts collaboration and confrontation, drawing two distinct personalities into a three year exchange of ideas, temperaments and sound file isomorphism. As stated at the outset, we'll never know, as Walkurnen is, to my ears, a realization of what Wehowsky called constant values like confrontation and discontinuous continuity.

I came to Walkurnen remiss in my exposure to Wehowsky's nearly three decades of experimental work. I totally bypassed the P16.D4 project, as well as his like-minded collaborators Nurse With Wound; I was a little familiar, in that area of music, with SPK. I also, despite having the acronym on my radar for some time, never heard the RLW solo stuff. Wehowsky has been at this sort of meticulous treatment of given material a long time, disabusing casual listeners of the notion Walkurnen is an entirely new creature. As far back as 1984, in reference to swapping tracks for the P16.D4 album Distruct [the cover is pictured above], Harry Poole of Smegma called their collaboration a complete tape, a thousand miles apart.

On the contrary, I am quite familiar with Korber's work, owning 20 or so of his releases. So my ears were predisposed, before a couple of listens relieved me of the effort, to locating Korber's sound and sensibility in this collaborative project. As I said, Korber has documented his frequently self-effacing approach to collaboration on previous releases; he limns and outlines more than he asserts or exerts himself, and brings this well-honed instinct to specific playing situations.

Wehowsky and Korber have resisted, or resolved, or simply ignored the edges of each other's personalities, and the tissue between improvisation and composition, and their fusion makes Walkurnen a furious, fun ride. Rendering, pulverizing and refining tape work, acousmatics and noise, Korber and Wehowsky clearly treated each other's contributions with patience, acute attention to detail, and unmistakable warping. In the same year Wehowsky stated his ideal of the anti-auteur approach, Korber said everything is a little part in a puzzle-let's talk about this again in 40 years. I hope these two don't take that long before creating another stunner like Walkurnen Am Dornenbaum. Should I relapse from my weak vow to forego Top Ten lists this year, this one will sit in the upper berth.

Walkurnen Am Dornenbaum was released in 2010 on the excellent Entr'acte label.

Perhaps in homage to the Rolling Stones' injunction, in the liner notes to Let It Bleed, to PLAY THIS LOUD, Walkuren's inner cover exhorts us to BE PROUD, PLAY LOUD!
Posted by jesse at 1:00 AM

I highly recommend the Rainey/RLW on Sedimental, to my ears a precursor to both this and the Rainey/Lescalleet on Erst, which will hopefully emerge by 2012 or so.

Yeah I'll second that one Jesse, maybe my favourite disc involving Rainey, one to definitely hear.

Great review, Jesse. I'm just hearing it now for the first time and liking it a lot.

I can enthusiastically recommend RLW's "Pullover" and "Points of Reference" as some of my all-time favorite electronic music recordings. In addition to that, the Wehowsky/Lionel Marchetti split release on Selektion is absolutely essential, as well. Wehowsky's music from around the mid 90s up to the early 00s has been very important to me over the years.

I clearly need to get a hold of some earlier RLW.
Ralf was very kind about this piece.