to be held for a long time 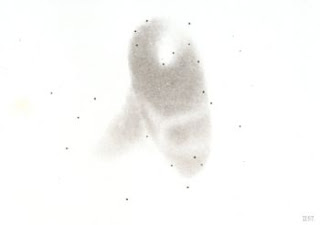 Nearly a decade after their 1999 release All Angels, the collective string-effects of the trio Cranc [Angharad Davies, violin, Rhodri Davies, electric harp, and Nikos Veliotis, cello] were recorded during their 2008 residency at the Brussels performance venue QO-2, and released earlier this year as Copper Fields.

I have spent some time imagining how this trio's individual trajectories manifest in Copper Field's seamless, stunning gestalt; I have accordingly referenced some of my favorite releases from the trio members at the end of this piece. Anyone familiar with either the improvised or the composed projects of Cranc's members over the past decade will realize the massed, intuitive droneage of Copper Fields is the result of each musician concentrating, distilling and boiling down their respective techniques, approaches and ideas. In other words, these are three musicians who could dazzle with a virtuosic, and, pace their 1999 version of Cranc, busy form of trio improvisation.

Instead, Cranc works with the edge-of-the-seat acuity of listening and apposite sound-placement that keeps me interested in this area of improvisation. More remarkably, I am referring to a 55 minute drone piece owning these felt elements. Cranc complexifies the drone template not via electronics or the iterations of process music, but by the pitch and textural changes and permutations created by their fingers. You can hear that, unmistakably; Cranc has an exquisitely tactile sound, and this is the quality I think you can discern by listening through some of their respective earlier releases. 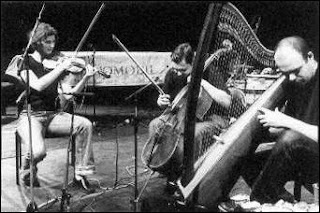 The title atop this page comes from La Monte Young's notation for a very early drone piece, Composition 1960, #7. The piece [I haven't heard it] consists of two pitches, B and F#, with Young's lucid instruction to be held for a long time. This notation can be applied as well to Cranc's eleven year affinity; that's a long run, however infrequently they perform or record, for an ensemble of this nature. The results of that affinity, and their approach to holding a sound for a long time, is heard in Copper Fields' unfolding surprises. There is that quality of how they function as a trio being invisible, even negligble, as you listen. You realize after you drift awhile this is three individuals generating this sound field, and, listened to with that thought foregrounded, indeed you'll hear Angharad's whistling, singing violin strings come forth and recede, Nikos' grounding cello, Rhodri's ability to plumb even lower into the depths of his excited, e-bowed table harp. There is no fuss to their sound, however-it seems to arise and develop from the collective unconscious. This is their affinity, the first fruits of holding their sound, individually and as Cranc, for a long time. 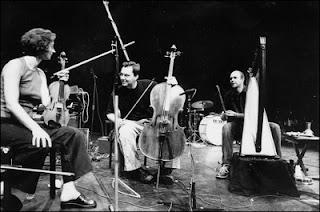 Such distillation. when the results are this musical, brings to mind what Lester Bangs said in his entertaining essay on Lou Reed's 1975 cause célèbre, Metal Machine Music-referring to the relentless feedback drone of Reed's polarizing experiment, Bangs said Lou just got rid of the guitars. Keiji Haino, referring to his project of doing cover songs, resulting in abstracted noise and droneage, said he was simply liberating sound from the constraints of the song. Cranc might be heard as engaged in a similar process of reduction, in their case, of gesture, dialogue and overt displays of their considerable techniques, resulting in an over-arching and organic unified sound. I cannot get over how much restraint and subsuming of their individual personalities this necessitates; almost equally, I cannot get over how electronic Cranc can sound.

Henry Flynt wrote an essay on a composition of just intonation for harpsichord. In that essay he refers to the [paradoxical] development of drone music in this way- ...the next step is to invent a system driven by improvisation, monitored by conscious perception of the process.
In somewhat clunky prose, Flynt might be referring to what Cranc achieves on Copper Fields I would very much like to experience Cranc's affinity in a performance setting. Without that option, I will settle for Copper Fields, which has been a rich and routine pleasure for many weeks.

The image atop the page is a drawing based on a view of the crab nebula constellation, seen through a 72" telescope, circa 1848.

Cranc is a Welsh-Romani word, meaning crab.
Posted by jesse at 1:26 PM