work on what has been spoiled 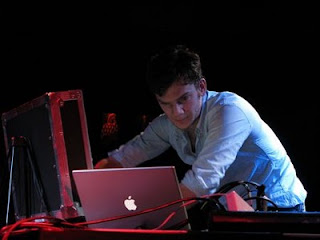 Thomas Ankersmit is a 31 year old musician based in Berlin and Amsterdam who personifies, even in this small corner of the sound universe, terms like recondite and low-profile. With only a few ridiculously-limited releases behind him [duos with Jim O'Rourke and Kevin Drumm, the latter being essentially an Ankersmit solo work with his reworking of a single Drumm base track], Live In Utrecht comes to us out of a great silence. Consider, then, a few more dimensions of Ankersmit's sparse output-Live In Utrecht is barely 39 minutes in duration, was recorded in 2007, and owns none of the qualities suggesting an agenda of amending Ankermit's long recording drought with a perfectly shaped, worked over opus magnum.

Bringing to the momentous occasion of his first proper release, supported by the considerable promotion and distribution imprint of Touch [actually released on the Touch subsidiary Ash International], is Ankersmit's sound generator of choice- the saxophone. For many improvisers in this stage of the game, the saxophone is arguably a self-selected liability. Certain to raise the hackles of the legions who argue the sax is still being used to create new and vital work, I approached Ankersmit's Utrecht performance, with its instrumentation listed as alto sax, computer and synths, with a milder version of Diaghilev's entreaty to Cocteau-astonish me! [Coupling a young, untried poet's text with the music of Satie justifies Diaghilev's high-bar demand-but I digress].

If you suffer a similar satiety where saxs are concerned, you will find in Ankersmit's sound world a welcome subversion of expectations. Even more potently, you can hear an improbable fusion of sonic elements that might seem, on paper, as being at loggerheads- the economy, pitch-sculpting and symphonic partials of Phill Niblock, braided together with the yakuza sax squeals and squalls of Borbetomagus. Ankersmit is working on what has been spoiled in these respective, seemingly dualistic musical lineages- intuiting as he has that the serenity of Niblock's drones include much that is disquieting, and that the surface abrasions and harshness of Borbetomagus can serve to burnish, polish and refine what the ear initially hears as noise. 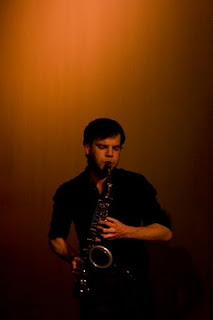 So on this occasion Ankersmit unspools a 38 minute skein of countless micro-events; initially carried along by a slightly unstable, reedy sustained drone, the music lurches and caroms, at times scarcely under control, pitching forward before collapsing into several episodes of near silence. Ankersmit encrusts his droneage with striations of pre-recorded sax lines [the contributions of Valerio Tricoli], ungainly, piercing upper partials, stacked throbs and pulses, and supernova bursts of freak register sax squeals. As soon as he has established this meticulous cacophony with frightening velocity and forward momentum, Ankersmit will deliver a hypostatic drop to a tiny, fragile pitch or buzz, and begin rebuilding and amassing anew. Without intending a spoiler, I must say the concluding 10 minutes or so, with its incremental movement toward a gorgeous cloud of sustained, massed reeds, is awesome. True to the overarching form of the entire piece, the mighty cloud of ecstatic sax voices get teased apart and distilled to a single frail line that fades as it emerged 38 minutes earlier.

Like Maryanne Amacher [R.I.P.], whom I suspect might be an influence, Ankersmit's sound-sculpting clearly would benefit from the in situ experience. Like Amacher, Ankersmit has been involved for some time with installation projects and reportedly pushes the air around with no small attention to the particular acoustic properties of a chosen space, not to mention the potential power and potency of playing loud.

The great discovery for me in this release is how Ankersmit is working on what has been spoiled by the inevitable, organic rotting of every played out area of sound; the balls-to-the-wall sax assaults hobbling many moribund free improvisers, and the steady-state ennui afflicting many drone artists. Ankersmit's work reinvigorates and fructifies these stagnant pools through their intelligent and visceral fusion. Live In Utrecht is among the most exciting music I have heard in some time.

His tour itinerary for the balance of 2010 has him alternating between stints with Niblock and Borbetomagus. He'll have no trouble crossing between these realms- Live In Utrecht does just that, and single-handedly.

Work On What Has Been Spoiled is the title of an 1981 release by Borbetomagus and Hugh Davies.

Work on what has been spoiled is also the commentary title for the 18th hexagram [ku] found in the I Ching. The hexagram is pictured above. Its literal meaning is translated, in the James Legge classic version, as a bowl in whose contents worms are breeding-this means decay.

Borbetomagus stated in an interview with Dan Warburton [Paris Transatlantic, 2006] they chose their band name as it means City of Worms.
Posted by jesse at 7:23 PM

really good work here again, Jesse. agreed that this record is one of the stronger releases of the year, and having seen him a few times in recent years, Thomas is indeed even stronger live.

Mike from Touch here. Thanks for this - good read! Can you change Touch Records? That is another label entirely. We are caled 'Touch'. Thanks!

Mike,
I made the correction, as well as making Touch a link. Thanks for that.