at play in the fields of the lord 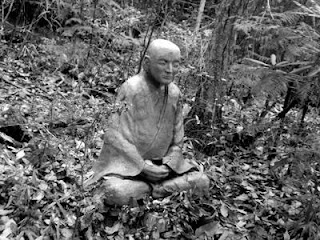 2010 has been a fertile and fecund year for Columbus, Ohio musician and droll Tweeter Mike Shiflet. In each new season, beginning in the spring with a vinyl release entitled Omnivores, Shiflet has delivered a new statement of where he is at in his now 13 year trajectory of soldering together pulse-waves, audio saturation, improbably dense clouds of hiss and spit, and, lately, shimmering and fragile melodic material.

Shiflet entered the summer with 070325/080409, another vinyl document, a split release capturing a 2007 live performance by Keith Fullerton Whitman, and a 2009 sketch for guitars and oscillators from Shiflet. One begins to hear Shiflet weighing and balancing the dualities rife in most of his work-analog and digital sources, serenity and placidity with agitation and the roiling maelstrom, the detailed shaping of massed sounds with a growing attention to each grain's shape and weight- and, to these ears, an organic development toward the autumn release of Llanos, a stunning realization and resolution of these seemingly contradictory elements. 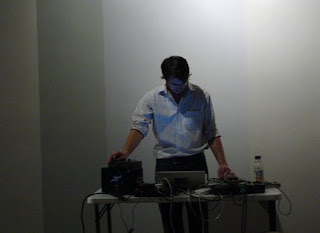 Shiflet has been drilling down into the possibilities of noise since 1997, starting with sculpting feedback and mixer squall, eventually launching the noise/drone imprint Gameboy, issuing a ridiculous spate of music, his own and that of kindred spirits [100 releases in 10 years, a fearful symmetry]. Coincidental to my thinking about writing about Shiflet this week, I received a package from Bryan Eubanks, whose ambitious 3-disc drone document, Desired Climate Works, 2006-2007 was the swan song edition of Shiflet's label. Shiflet returned from a year in the Hyogo prefecture of Japan in the autumn of 2007, closed down Gameboy, and embarked on what sounds to me, in a survey of the 15 or so releases I have from him, a reconsideration of the elements pervading his work- the aforementioned dualities of face-pasting walls of noise, and the shimmer and gleam that emerges from the eye of the storm.

The noise and the music have made peace.

You can hear this balancing of sonic spit and implacable serenity on Omnivores, an album lovingly designed by the young, wacky visual artist John Malta. One side, entitled Omnivores, roils and scalds with the intensity and volume familiar from many Shiflet releases. The flip side, Scene Destroyer, boils down to a baseline of rumbles and chirps one feels on their skin following an electrical storm in a Midwest summer.

080409, Shiflet's side-long slab of guitar and oscillator pulses from a 2009 gig, was paired with Whitman's short ride in a fast machine, 070325, by Amethyst Sunset label head William Berry. On 080409, Shiflet morphs from pleasantly unstable rumbles and cresting waves of detritus, into guitar-driven ring modulations that build to a shrieking, Goblins-esque soundtrack for an imaginary horror film.

Both sides [Whitman's deserves further elaboration, away from the focus here on Shiflet's work] bring to mind how much the music I hear these days involving the analog synth is loaded with either homage to or an attempt at innovation or escape from the long shadow of Eliane Radigue. There are homages aplenty to every wave, sawtooth, square and sine, to be found in Shiflet's generation of analog wranglers. I hear this reckoning with Radigue’s colossal presence and the felt force of her compositions, in the explorations of Justin Meyers, Eleh, Whitman and Shiflet, as well as many others. Radigue looms over this area of striated analog droneage like Coltrane over the successive generations left to deal with both the storied sheets of sound of Giant Steps and the stratospheric leaps and freak tones of Coltrane's final few years.

It was in the extremely limited-release 3" from 2009, Supreme Trading, that I caught a glimpse of the unabashed regard for a lovely melody that, prior to this period, had to be content to peek through the squall and din of Shiflet's delusions of the fury. Recorded in 2008, easily passing off the radar with only 70 copies printed, a one-off of a 2008 gig, Supreme Trading finds Shiflet dropping through the familiar building noise into a jaw-dropping melody, the rare emergence of duende in his vocabulary.

The most beautiful thing in the world.

Just released on his own Editions Shiflet, Llanos ties together the coruscating tone work, scattered across Shiflet's contributions to over 60 releases, with the excess audio of early furnace blasts like Xenakis Youth and Last of the American Sessions.
Llanos [originally referring to the grasslands and fields of Colombia and Venezuela] is [bear with me, I will sharply digress here, but only for a moment] itself a response to a field; this is not Shiflet's first meditation on a specific field and the specific consciousness tied to the memory of that field. Shiflet articulated the first field encounter in 2003 in a brief essay, the second in the music of Llanos.

In 2003, Shiflet published a reminiscence of what Erikson called peak experience, what zen calls satori, in [of all places] Stylus magazine. In Cuyahoga park, eight years ago, Shiflet encountered a field populated with many deer while listening to Fennesz's Made In Hong Kong. The sight of the deer at play, the sounds of Fennesz, and the joy that surged through me that moment, clarified something for Shiflet. I was literally motionless, going on to say My life will probably never again be so perfectly soundtracked.

Now we come to Llanos, another encounter with another field. Again, in the accompanying notes to the CD, Shiflet writes about coming into a space, this one a stand of pines in the late summer, and experiencing something that necessitates making the music of Llanos. The album, he writes, is a futile effort to recreate a perfect moment in a perfect world.

It is significant to me that nearly eight years ago Shiflet's perfect soundtrack issued from another, admired musician, while this year he has created his own. Llanos encompasses, as I have said, much of the musical territory preceding it, but in a markedly unitive and mature way. There is no separation, to these ears, between howling noise and gorgeous melody, between the nearly overwhelming force and forbearance of the sun, and the rising wisps of steam and fog of late summer. Something indelible and illuminating occurred in that field, and Llanos is Shiflet's best effort to convey, in his developing vocabulary, the sound of the pine shadows and the setting sun's light on the back of the eyelids.

Shiflet's fealty to the elements of noise is all the more striking, given the tendency of artists who report similar peak experiences toward overtly precious, treacly music. He is so within himself on Llanos he can't fail. However futile or flawed Shiflet estimates his music to be in recreating the fields of a perfect world, it is exciting to hear him reach for that kind of work, that fusion of memory, specificity, and play. The music and noise have made peace.

All quotes in italics, Mike Shiflet, sourced from Stylus magazine and Editions Shiflet:

At Play In The Fields of the Lord is the title of a novel by Peter Matthiessen
Posted by jesse at 1:02 PM