My breath is long-that's the measure, one physical-mental inspiration of thought contained in the elastic of a breath.
~ Allen Ginsberg


Lucio Capece has contributed his reed instruments, shruti box and carefully developed concepts to quite a few releases in the past few years. Listening through a clutch of these, I decided to leave aside the overtly conceptual, performative utterances from 2007- his collaboration with Mattin, No More Music-At the Service of Capital [well worth hearing], and his contribution to the Wedding Ceremony release- to focus on three duos from the past two years. While these three projects pair Capece with disparate temperaments and instrumentation, I began to hear an aspect of continuity and cohesion across the pairings that points to Capece's understated role as a framer of the pieces- his breathy reeds and shruti box limning, shading and subtly nudging the direction the duos take, not unlike the way in which Keith Rowe's recondite but sturdy sounds-at-the-edges-of-the-canvas operate.

Drilling down deeper into the gradually emerging, unflickering presence and influence Capece attains with the gentlest of sounds, even when his foil is the amplified plangency of metal springs, motors and frying pans, as in his stunning collaboration with Lee Patterson, Empty Matter, I hear what the unitive element is for me.

It is his breath- when measured, applied and integrated as Capece does in these meetings, there is nothing less intrusive or obvious, nor more tensile and powerful, than the mindfully measured breath. Capece's breath lengths, as well as the textures of tongue and lips, find their analogy in the privileging of the breath as the basic metric of the poetry of Ginsberg and his contemporaries, as Rowe's analogous, likewise initially imperceptible role as a canvas for his collaborators has its metaphor in abstract painting. 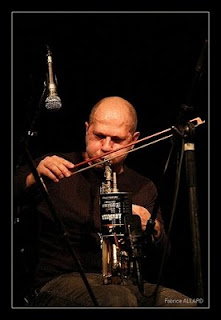 No start, no ending, no development, Capece has said of his musical aspirations, at least not in that [nor in any] order. Indeed, some of Capece's work, particularly the duos with Radu Malfatti and long-time collaborator Sergio Merce, can easily be imagined as unspooling endlessly in the aether, riding the breath, without beginning or end.

Capece's reed sound is also conveyed by the shruti box, to heightened effect in his duo with Merce, Casa. Their lengthy drone, issuing from the shruti box and Merce's empty portastudio, followed by a too brief duo for sax and bass clarinet, sounds like a celebration of the pair's decade long friendship. Capece and Merce, on the latter piece, employ overtones, tongue flutters and multiphonics so subtly, you might forget that these techniques are frequently put to use in the lexicon of free jazz. In his stabilizing role here, as Merce produces occasional groans, shrieks and spluttering pitches within the multivalient droneage, you can hear my point about Capece's breath work. Mindful that the usage of breath here is metaphoric, the shruti box being a different sort of reed instrument, listen for how Capece provides the spine for his partner's whorls and spirals of sound.

This adamantine quality of Capece's breath-work is tested and teased even more rigorously in his fantastic duo with Lee Patterson on Empty Matter. Patterson's pallette includes an amplified spring-board redolent of Will Guthrie's junk instrumentation, and a frying pan of chattering chestnuts [the sonic cousin to his marvelous-and I'm not being ironic- recording of fried eggs on his 2009 Cathnor release, Egg Fry #2]. In other words, Patterson tosses ingredients into the mix other than the steady-state pitches endemic [and frequently anemic] in drone works. This makes for a more visceral, at times raucous affair; again, Capece holds his mat with superbly focused long tones and nuanced variations in pitch. Equanimity is not an absence of imagination nor flexibility, and I hope I am not conveying the idea that Capece is somehow rigid or unresponsive in adhering to the anchoring breath. On the contrary, he can move between his partners' clamor and absurdist sound sources with a flexibility that serves each project admirably.

Perhaps the most obvious pairing here of the three, is his 2009 duo with trombonist Radu Malfatti, Berlinerstrasse 20. I don't really know what to say about this session, outside of it is a gorgeous release, and if breath as a basis for structure and improvisation interests you, get it. Malfatti maintains that paradoxical effect his work has of melding tension with serenity, at times twining his low tones with Capece's vaporous bass clarinet, other times engaging in the parallel play of the bottom of their respective instruments. It may sound precious to some, but in the framework Malfatti and Capece establish, Malfatti's fingernail clicks and taps on the trombone are as signal and effective as his spare, stellar note-shaping.
What determines the time between the sounds?, Francis Brown asks in his koan-like liner note. Clearly the joined sensibilities of two musicians who have cultivated acute listening, and weigh each sound for its appropriateness in-between the silences.

Capece floats, shimmers and at times seems to disappear among these three duo works. Sometimes a musician in this area of music will challenge themselves with an extreme reduction of means for sound production [Sachiko M's sine language, Nakamura's indeterminate empty mixing board], or reimagine the archetypal instrument [whatever you call that object guitarist Keith Rowe approaches with increasingly bracing results]; Capece has been working with that most elemental, immediate and available sound source, the breath. In some respects, he is making some of the most, as Rumi would have it, human-sounding music around. I cannot recommend him, or any of these three duos, highly enough.

Casa is on the fantastic imprint, organized music from thessaloniki

Empty Matter is a jewel in the catalog of Another Timbre
Posted by jesse at 1:19 PM