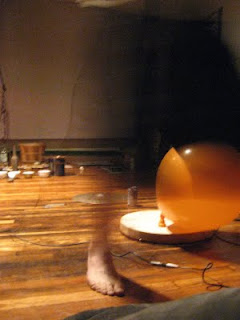 Under the name Horaflora, Raub Roy released three works in 2010 that issue from the borderland between audio terrorism and absurdist high spirits. Craterellus Cornucopioides and The Gland Canyon are from the Install Digital archives, and are solo works; the 17 minute duo work considered here is from a split 12" on Hot Releases [the other side being songs from Secret Boyfriend, the nom of Hot Releases owner Ryan Martin].

Roy's partner for this session in 2009, recorded live in the KALX radio studio, is Andrea Williams. The few reviews I have unearthed of this record do a piss-poor job of clarifying the role of joint conspirator Andrea Williams, whose laptop and real time field recordings flow seamlessly with Roy's truly cracked sound sources [expelled balloon air, street sweeper bristles, and other transduced and filtered noise makers]; the duo's flow is a nearly ceaseless caroming, careening one, dropping abruptly [and beautifully] at around mid-point to a still-point of pinged, singing bowls and near silence, before chugging again into the skillful maelstrom of their funhouse stereo field.
Raw, manic [and only lightly edited], Roy and Williams maintain momentum and ballast throughout the 17 minute ride; the flux and rapid segues, nonetheless, reinforce the funhouse affinity.

The duo do like gizmos- the three Horaflora releases I have heard comprise some of the strangest sonics in my collection- and mash their low-fi electroacoustics with apparent giddiness. What supports repeated listens is the shape and intrinsic coherence of their sound field. Roy has been at this for a decade; Williams has contributed to events ranging from a 2009 performance of David Tudor's seminal Rainforest VI, to Soundwalk events at venues like Issue Project Room and the Whitney. On the way to skull-ringing meetings like this one, Roy studied sound art at Hampshire College, and Williams is finishing an MFA in electronic music at Mills College.

Horaflora's works place him in sharp relief from his many more mannered and studied contemporaries. His improbable instrumentation [toothbrushes and balloons diffused through cracked electronics], DIY-performance spirit, and occasional deft collaborations like this one with Williams, are a fresh wind blowing through the at times arid landscape of EAI. The fuck-all velocity and bizarre sound sourcing of this date will fall on the deaf ears of listeners who require a whiff of the decorous and high concept in their electroacoustics. Good on Raub Roy for bringing a little impertinence and evident fun into this area of music. It may be a funhouse, but it's serious fun.

Andrea Williams
Posted by jesse at 1:32 AM