you have to talk about love 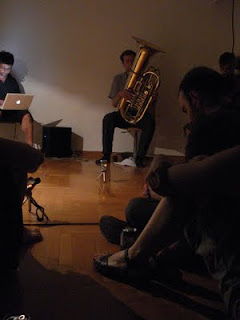 This is my review of Tables & Stairs as it appeared in the May issue of The Wire. It was edited from the original to excise about 230 words.

The heading above is lifted from Robin Hayward's explanation of the title he suggested for the trio's intimate recording. He said, tables and stairs’ is actually a play on ‘tables and chairs’ which in English you use in the context ‘you have to talk about love as if it were tables and stairs’ i.e. talk about something romantic and heartfelt in very everyday language.

The skillfulness of the musicians in Tables & Stairs is evident in their ability to transcend geography, lack of a shared language, the spontaneity of the occasion, and the instrumentation (customized tuba, sine generator, and cello) to create music of considerable dynamic range, tension and balance. Add one more potentially self-limiting element: Tables & Stairs is, overall, yet another drone structure, a form fraught with the risk of the best players lapsing into monotony and an enervating bliss.

This recording brings together musicians from Catalonia, Greece and England-by -way -of-Berlin who encounter each other for the first time. The occasion for this trio’s serendipitous music-making speaks volumes about the matrix in which such music is formed and sustained: in June 2010, the three were in Athens , Veliotis and Fages participating in a music festival, Hayward meeting them while there on other business. Invited to yet another Athens-based musician’s apartment to play, the trio set up for a few attendees, issuing forth thirty-one minutes of spontaneous, meticulous and restrained improvisation.

The musicians’ poise and apposite sound selections never lapse nor slacken, as each sustains the braiding and teasing apart of oscillating sine waves, microtonal tuba plosives and horsehair rasp. There are several distinct episodes across the thirty-one minute droneage, Fages and Hayward in particular supplying the grain and grist essential to making one more iteration of drone compelling.

The scope of pitch and timbre made possible by Hayward’s microtonal tuba sounds illimitable. Strangulated cries and part-singing swell and subside amid the low-end thrum. An instrument assigned too often to the lugubrious end of the spectrum, Hayward’s tuba is discursive across five octaves.

While Veliotis’ cello serves as the effortless foundation and sometimes sedimentary base for the trio’s spiraling pitches, drifting textures and occasional ebbs to near silence, it is Fages’s sine work that is most subversive. Beyond the keening, head-ringing sounds associated with the vaguely pathological sounding sinusoid, Fages introduces, in several striking moments, sine waves massed like strings, strongly reminiscent of those heard in the allegro nervosa movement of Ligeti’s Second String Quartet. These startling braided waves rise above the rumble, are held briefly to shimmer and excite the air, before subsiding. Fages is spare with this effect, making its appearance the more dramatic. I have never heard sine waves fashioned this way, and their inclusion here is perfect.

It is signal of these three musician’s sensibilities that a casual session, unintended for release, could produce such rewarding work. From this unfussy occasion comes music that will gratify fans of both intelligent, nuanced drone, and, for those who drill down, improvisation made from minute particulars. This half-hour drone piece ends not with a bang, nor a whimper, but something satisfyingly other.