Every work of art is an uncommitted crime.
~ Theodor Adorno

Detractors of Miguel Prado's detournement treatment of composer Michael Pisaro's Within [3], and his Situationist prank piece Comedy Apories, which pillories [with a light touch] the Wandelweiser collective's aesthetic of isolated events, arranged in time, might disagree that no crime has been committed in these two releases. The offense, if there is one, is against the often humorless mien avant music fans show when their annointed ones are treated with anything other than reverence. It may be mere reflex to detect a whiff of the Oedipal in Prado's choice of Pisaro and Wandelweiser as the subject, however detourned, of his Heresy label's first two releases; his regard for this area of music is transparent, even affectionate. The label, however, is Heresy, and Prado's appropriation of the Situationist device, detournement, is pointed and purposeful. How Prado updates Debord's A User's Guide To Detournement is different on each release.

Within [3.2], the name conferred by Pisaro upon hearing the results of Prado's fuzzed-out, electric iteration of a work originally realized on classical guitar, unabashedly erases a signature aspect of Pisaro's early works - the single note granted the time and space it needs to arise, hang and decay naturally. Prado's version sounds each note with the distortion and sustain afforded by electricity; rather than peal, the notes clot, coagulate and smear the air. A luxurious, if sometimes grimy, drone supplants the tension felt when the silence between notes is present. The basic structure - six sections, 10 minutes each - is maintained, as are the silences between sections. Otherwise, this is a truly reimagined work, one I took to upon my first listen. Preferring the lacunae of Pisaro's acoustically realized pieces is a matter of taste. They that approve a private opinion, call it opinion, Hobbes observed, but they that dislike it, heresy; and yet heresy signifies no more than private opinion. Right. Not to privilege the label name too much, though Prado says on his label site his intent is adding a heretical approach, I regard Within [3.2] less as heresy, more as after Michael Pisaro. 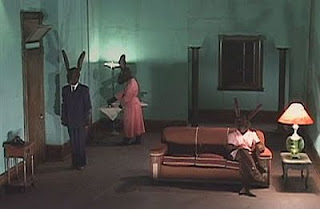 Consider now the follow up Heresy release, Comedy Apories - now you enter the interlaced ideas of Zizek, Brassier, anti-comedy, and, from my perspective, equal parts Pataphysics [for example, the clunky signifier Prado lifts from Zizek in describing his work as an interpassive composition], the Merry Pranksters' mockery of the banal, and the detournement of Wandelweiser.

Comedy Apories, at least as far as what I felt with the number of listens I gave it, is variously chilling, irritating, and apathy-inducing; append to your listening sessions the conceptual link Prado makes to the similarly structured Wandelweiser pieces that feature recurring, brief sound events along a lengthy skein of silence, and you have an experience closer to the Stanford prison experiment than, say, Weites Land, tiefe Zeit. It occurs to me as I write this how many of our friends and associates describe the music we listen to with avidity as torture, so don't toss off my analogy too quickly. The piece consists of aperiodic two second bursts of the most affectless laugh track you've heard since the equally distressing one used by David Lynch for his rabbit dramedy show in Inland Empire. It is a sterile and unappealing antithesis to the grimy sensuality of Within [3.2].

I can't say how deliberately Prado set out to release back-to-back works referencing the world of Wandelweiser in such divergent ways; both are variations on a given Wandelweiser aesthetic area, but to my ears the first amplifies and enriches its antecedent, the second renders it banal and insipid. Whatever his intentions, Prado stirs the pot, which is vital. Progress, this great heresy of decay, Adorno bemoaned; listen for yourself, see if you hear what I hear in Prado's detournements - not heresy, but the variously loving, exuberant, deadpan killing of idols.


Adorno quotes from Minima Moralia: Reflections From A Damaged Life, 1951