Three releases from the latter half of 2010 raised an unholy and convincing din, each in their own way - Diatribes' complaintes de marée basse is borne along by torrents and tremors of percussion, not without its quieter, collected pools at times, but generally clamorous and plangent. This updating of free improvisation remarkably renders the trio's individual roles as anonymous as any aggregate of the electro-acoustic branch of improv, the specific sprung sounds and metal-scrapes seemingly sourceless.

Tomas Korber and Gert-Jan Prins' challenging long-form, live performance, RI 1.5442, also in its way propulsive and sizzling [Prins was a drummer in a free improv unit, and has collaborated with Mats Gustafsson and Misha Mengelberg], has ear-scrubbing episodes of excess audio and air raid signals. The duo make noise of a very different sort, however, than that heard in Diatribes' approach; Prins and Korber take their sweet time to develop striations of grit, hiss and crackle, somewhat like Radigue-on-Mego. Reduced to a single descriptor for the trio gestalt of complaintes de marée basse, I'd offer free motion; for Korber/Prins, seething.

Dotolim, a scored work by Jason Kahn, is realized by, for me, the most exciting musicians working in refined abrasion around, the Seoul-based crew of Ryu Hankil, Jin Sangtae, Hong Chulki, Choi Joonyong and Park Seungjun. This blast of ineffable noise, issuing from hacked, broken electronics, wrangled and wrested in a nearly alternate musical universe, has infused improvisation with an element far too absent for far too long - a willful, head-long charge toward the revivification of this music, achieved solely and wholly by risking complete disaster. 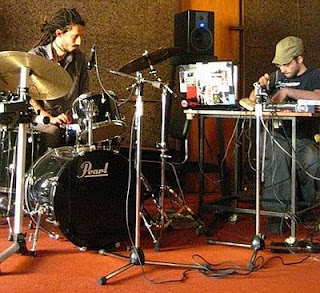 Diatribes is the duo of D'Incise [a.k.a. Laurent Peter] and Cyril Bondi. Since 2004, they have released a slew of stuff, often with a third element added, here Lisbon-based guitarist Abdul Moimeme. Bondi has been involved in multiple hip hop projects and free improv ensembles. D'Incise likewise channels his ideas and approaches through disparate playing situations. On this occasion, the trio offer up several signal qualities of the free improv branch of things; the 47 minute release consists of seven tracks, seven concise skirmishes as opposed to the 74 and 70 minutes respectively of RI 1.5442 and Dotolim; each player wields various percussion instruments, ala the era of the Art Ensemble of Chicago little instruments convention, a liberating approach to group improvisation that predictably became a time-stamped orthodoxy. No danger of stagnation in this trio's approach- the percussive churns and swells of Diatribes, colored to fantastic effect by Moimeme's two prepared guitars, are only occasionally of the diminuendo sort the AEC [and so many others] worked and reworked. While not averse to making big waves before subsiding into quieter squalls, the trio achieve much greater dynamic range and overall balance than that. Small sounds are raised by amplified springs, metronomes and cymbals; Moimeme dances over his modified guitars sounding at times like a balafon, pitched cymbals and, on track six, Pete Cosey; industrial park murk and metal scrapes yield to sections of muted but no less eventful buzzing and blooming noise.
This is really strong work, occasioning in me the rare feeling of regret that it will be lost to ears aversive to free improvisation, due to the area's inarguable exhaustion on many fronts. I want to hear more from all three of these musicians-they're not fucking around. 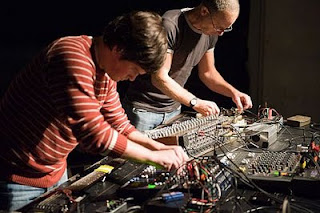 The occasion for Korber and Prins' long-form journey into the subtle shape-shifting of a seemingly static slab of noise, 1.5422, was a 2009 performance at the Utopian Royal Saltworks in eastern France, architect Claude-Nicolas Ledoux's visionary, if incomplete, mandala of a structure. Not even an Enlightenment visionary could have imagined this re-imagining of music as sonic grist-s-t-r-e-t-c-h-e-d-over-time, with incidents of chugging percussive patterns spun from pink noise, and the long seethe that is the form's intro and improbably lengthy, drawn-down outro. Korber has long been a sonic distiller, much of his music simmering like a rue that can soothe or sting. Frankly your affinity for this one will depend greatly on whether you are drawn into its long sizzle long enough to hear the nuanced and detailed play of its grain and grist. I am- as I discovered in my many listens to Korber's stellar 2005 release, Effacement [scroll midway down the page], Korber's finest work creates environments as akin to weather as, say, to painting or sculpture; much of his work, and 1.5422's 74 minutes mandate this approach, is best enjoyed by allowing it to rain down, sometimes pelting and stinging, sometimes soaking you. 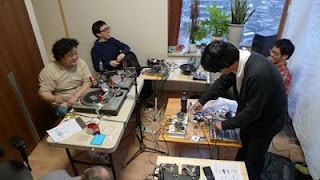 Dotolim is among the most exciting music I have enjoyed in some time, but that's not a recommendation. This is a steep climb for most, I am sure, as the Seoul musicians who have maintained Dotolim as a vibrant, if claustrophobic, performance venue [it's the size of a walk-in closet], are seriously pushing their music towards the brink of collapse with great humor and a serious intensity. If you thought their antecedents in improv and new music were appropriating the detritus of orphaned sounds for their lexicons of extended techniques, you ain't heard nothing yet-Dotolim bubbles, scrapes, screeches and lurches along, Kahn's score of abstract symbols for each player serving as hints for their wending their noisy way into a great, massed wall of undomesticated music, the sprung, teased out innards of the crew's cracked open disc players, hard disk drives, whacked out turntables and short wave radios [some great captures pulled into that hermetic room] coalescing and pulling apart with ugly beauty. The crescendo near the 60 minute mark is thrilling, no matter the sounds sourced, a hair-raising realization of Kahn's stated intention for the piece- I wanted [Dotolim] to emphasize the density of this group of musicians, both in terms of their sound... and of the space itself, which seemed at times barely able to contain the mounting blocks of sound [the group] generated during the recording session.
Dotolim is made of nearly every ugly sonic byproduct you can imagine issuing from the mechanized, throw-away toys of our time, with meticulous attention to the piece's overall shape, sound placement and the player's conjoining of elements. Hong, Ryu, Choi, Jin and Park, in their meeting with Kahn, sparked a recognition and embrace of the creative possibilities for music in the cast-off and broken. Kahn provided the score, and the rest is noise.