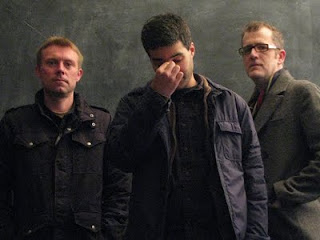 I am pleased as hell to announce the fourth concert in the crow with no mouth 2011 series: Haptic, the trio of Steven Hess, Joseph Clayton Mills & Adam Sonderberg, will present, the day following its world premiere in Chicago, a new composition by Michael Pisaro, concentric rings in magnetic levitation, for sine tones, radio, tape, piano and percussion.
The performance will be at Studio Z in St. Paul on October 23, 2011, at a time to be determined.

I am pleased as hell as I have enjoyed Haptic's work for some time, as well as the myriad other projects associated with these three fantastic musicians; these latter are, well, myriad, so use the Discog or the Google search, and follow the links. That a second Pisaro work will be included in the 2011 crow series is a deeply gratifying touch.

More information to follow - follow the link on the crow promotions side-bar for updates on all of the concerts.
Posted by jesse at 1:16 AM