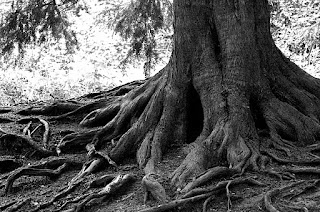 (This Tree Will Be Here For a Thousand Years)

The French bassist, composer and improviser Bruno Duplant has emerged in the last several years as a musician plumbing the fertile area where composition and improvisation leak, leech and, at times, coalesce. We are growing accustomed, as listeners, to such musical rhizomes; some listeners regard discussions of how one like Duplant organizes sound – the roots struck and the branches on which he and his compatriot’s sounds wobble and quaver – passé and played out. Should I reach that point and find my enjoyment of such aspects of the music under discussion exhausted, I hope I might recall when I marveled at the agility and ardent interrogations of players like Duplant. In the last two years he has released works of radical distillation such as Intermediate State and Slow Breath [the latter bearing an apposite dedication to Radu Malfatti]; Duplant seems to have grasped the spirit and intent of much of the Wandelweiser collective’s balancing act of the dual energies of grounding and ascending sounds.

The rhizomes Duplant is cultivating are not breaking new ground, of course; they can be heard, for example, in the early 1960’s trio of Giuffre, Bley and Swallow [Free Fall], where you find the antecedence of such musical values as make every note matter, the displacement of the individual ego, and the thrill of the improvising composer’s retrograde motions. Duplant likewise favors the trio format, which usually includes the Portuguese reeds player Paulo Chagas. The intuitive, mutual play unspooled between Duplant and Chagas is of the sort gained through their privileging equally highly attuned receptivity, occasional spirited interplay, but above all, the creation of a very specific atmosphere suggested by Robert Bly’s phrase [in his poem An Empty Place], …like doors into the earth. That sort of plumbing, root-striking music hits a deep nerve – it is only later one considers the means by which such an atmosphere is created. Both the composed and the freely improvised works Duplant has restlessly produced in a very short period of time own this quality of braiding the two energies – rising and burrowing down – the flight of Chagas’ clarinets and soprano saxophone [cf., for example, Evan Parker and Steve Lacy’s Chirps], the earth-bound rumbles and bellows issuing from Duplant’s bass, prepared and otherwise, and, in the case of this fine recording, Lee Noyes’ piano [innerklavier and otherwise].

So consider The Bias of the Things as a fresh tangent along the curve of contemporary composition and free improvisation. The five pieces are sufficiently spacious for the trio to hang their discrete sounds, as well as to occasionally rattle and roil like an updated entry in the Incus catalog [the affinity of Chagas’ reeds with that era of Evan Parker is self-evident]. When the trio incorporates strings attacked in every conceivable way, microtonal clarinet, and the warped audio of old ballroom recordings, as in the sly Tango For Small Things of Everyday Life, they bring forward the sort of low-fi gestalt heard on bassist Kent Carter’s essential 1976 document Beauvais Cathedral.

The pleasing, dislocating experience of listener uncertainty as to what precisely one is hearing, and what sound is issuing from whom, threads throughout the pieces. Chagas’ contributions alone are foregrounded, as he plays mainly within the range of his reeds made familiar by Lacy, Parker, et al. Duplant occasionally pushes his bass through a small Danelectro Honeytone amp, producing distorted timbres that supply the trio with grain and grit. This is my first encounter with percussionist Noyes’ piano work; happily in this context he approaches the piano chiefly as a percussion sounding board, inside and outside, both plangent and dulcet. Noyes is, as I have heard him be elsewhere, a sensitive and alert improviser, and sustains the trio atmosphere superbly.

So consider this dynamic trio’s work a fresh tangent, flowing from the dual tributaries of John Cage, and the animus of self-determination that informed small group improvisation on labels like Emanem and Incus. Derek Bailey, whatever one makes of placeholder names like his non-idiomatic improvisation, knew well the imprecision [including his own] encountered when one tries to articulate too fixedly what this sort of thing sounds like. Suffice it to say I find the trio’s branch of a very old tree bracing, owning a loving fealty to where it came from, and a determination to contribute to where this music is going.

This Tree Will Be Here For a Thousand Years, Robert Bly, Harper & Row, 1979