the thought of a new unknown 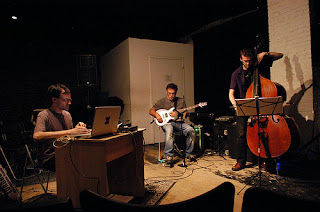 I am frankly embarrassed that most of my musical life has been spent in the search for new materials. The significance of new materials is that they represent, I believe, the incessant desire in our culture to explore the unknown. Before we know it, the flame dies down, only to burst forth again at the thought of a new unknown.

Few who visit this blog are unaware that we are slouching, depending on your global position,  into the 233rd day of the Year of the John Cage Centenary. Some, of course, may actually be buoyant, carried along by the interminable events, happenings, and general merry-making that, considered in toto, accrete into a sort of  homage-circus. This seems doubtful, however, if you hold a regard for Cage that is more considered than the superficial, nostalgic silliness that continues to contaminate Cage's legacy.

Beginning September1st, fully aware that I might, as Cage had it, only make matters worse, I will be writing about three concerts that took place at the AMPLIFY 2011: stones music festival in New York from September 1-15. From the 35 (!) sets of music that occurred over those 15 days, I will consider three that I think might be regarded, from a certain perspective, as offering music by six contemporary composers/improvisers who work in an authentically post-Cagean way, sans ersatz nostalgia and cheap imitation. I say from a certain perspective advisedly, as I think Cage, at best, is only one antecedent informing the works under discussion; in fact, I wouldn't be surprised if some of the musicians involved might argue that Cage has been a minimal or indirect influence on their sensibilities. I doubt I will attempt any argument for or against the right-size of Cage's impact; I have no interest in positing and defending such metrics.  Rather, I am content to offer what I hear in these three disparate sets, with a suggestion that their release on the Erstwhile label as ErstLive 009-011 - one pair about three weeks before and Keith Rowe's September about three weeks after September 5 (Cage's 100th, but you knew that) -  is apposite.

s'approcher s'eloigner s'absenter (for three performers) was created for the festival, a trio realization  of a very minimal Beuger score; the trio is Barry Chabala (guitar), Ben Owen (electronics), and Dominic Lash (double bass). I will leave specifics about instrumentation and sound-sourcing for the Wolff/Rowe set to my forthcoming pieces.

I had every intention of attending some part of those 15 days, and was unable to do so. Jon Abbey was aware of that, and suggested I might approach the three sets, obviously bereft of the felt elements of those three nights - the crushing heat, the human electricity, anticipation and tension - as if I were there.

I am confident Beuger continues to, as he put it in an email he sent me today, work in the wake of Cage. Scrapping any attempt at polemics, and undaunted even by any of the amazing musicians involved arguing against a direct link to Cage, I listen to these sets, guided by the impact Cage continues to have on my heart and mind.