I who make a profession of mute things 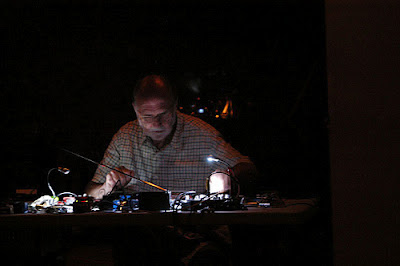 For some time now, beginning well before hearing September, the title of the forthcoming ErstLive011 (Erstwhile Records), I have sensed an affinity between elements of Rowe's solo documents, particularly the four released in the last five years, and the prose sensibility of  mid-life Samuel Beckett, particularly that found in the 1951-1953 trilogy Molloy/Malone Dies/The Unnameable. It has grown insistent, while remaining difficult to identify with specifics. I have mentioned it here and there to the few people I imagine would be interested in the notion, Jon Abbey and my long-suffering wife among them. I initially said things like Rowe is moving along a line of self-erasure, and Rowe is, like Beckett at a much younger age, reducing and abstracting his art until nothing will remain but pure consciousness. Stuff like that.

September has arrived, and has only clarified this idea further for me. I have no earthly idea if Rowe has read Beckett, esteems or is indifferent to Beckett, or what he might say about any of the corollaries I am setting out to make here. I know, intuitively, that listening through Rowe's gripping solo releases - The Room (2007), ErstLive007 (2008), Concentration of the Stare (performed in 2008, released in 2011), and now September (performed in NYC on the 10th anniversary of the September 11, 2001 tragedy) - is akin to reading through Beckett's prosody of subtraction and loss. In two years and three novels, Beckett subtracted plot, external referents and multiple voices and points-of-view (even in Molloy the two principals - Molloy and the detective Moran - are clearly two facets of one consciousness), until we reach the radically reduced state of things in The Unnameable - the boiled down recollections and emotional states of the narrator. Are they advancing towards muteness? Hardly - Rowe, like his literary kindred spirit, begins each new solo work from a state of muteness, from an existential ground zero, intentionally making art of aporia (more on this turning word later), expression through subtraction. Rowe, from a 2007 interview: I was inspired by a quote from Poussin, a painter from the 1600s. In a letter he wrote "I who make a profession of mute things", which always struck me as a fantastic way of describing the role of an artist.There is an inherent muteness about things, that an artist brings out the possibilities from muteness. Beckett, referring to his necessary annihilation of Joyce's influence on him, said Joyce was always adding to it (prose)..I realized that my way was in impoverishment...and in taking away, in subtracting rather than adding. 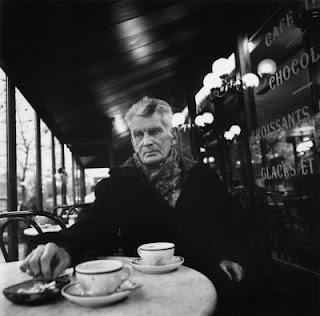 In just three years, the same span of time traversed from Molloy to The Unanamable, Rowe moves from the relatively logorrheic EL007, with its numerous, occasionally spirited cultural templates (Rowe's term for the samples of classical music that serve as autobiographical touchstones along the way of that solo performance), to the harrowing reduction of September, with its sole template being the second movement of Dvorak's Piano Quintet in A Major. Driving me since I was in my late teens, driving the agenda towards more and more and more abstraction, reduction and abstraction, reduction and abstraction, it's who I am, Rowe told Jon Abbey in 2010. The solo work, he said, offers the best opportunity to clarify who you are. I think I am on to something with this self-erasure business.

What do I hear along the way Rowe has traveled in the past several years' solo statements (and to be clear, this process is heard as well in all of the duo settings Rowe seems to favor, especially in the past decade; on Erstwhile you can hear this gradual subtraction with four playing partners on  six strong releases - with Burkhard Beins on ErstLive 01, on three releases with Toshimaru Nakamura,, and one each with Sachiko M and Radu Malfatti)? Well, again, as in Beckett's narrative voice, a strong pull towards obliteration and silence. While EL007 and September are within two minutes of each other in duration, consider this: the earlier work is limned with four classical pieces, introduced at relatively spacious seven and a half minute intervals, varied in their sentiments, evincing, according to Rowe, various developments in his artistic life, questions and quandaries along the way. On September, Dvorak's dumka movement comes forth every 4-5 minutes, its moving violin and piano obliterated by radio captures of alternately banal and grating pop music and talk radio. Rowe has referred to his radio captures as intrusions of a world without focus, as overprocessed, distorted, overwhelming sounds that pummel and bruise and stain his work as it unfolds - this is the world I think we live in, he says. The Budapest Quartet, with Clifford Curzon, are put to the test on September, surging back subtly every few minutes into Rowe's discursion, only to be mocked and mauled by the Police, a hideous snippet of contemporary country music, a braying talk radio voice, and, most powerfully, by Rowe's own hand. Onomatopoeic as it is, Rowe sounds, towards the end of September, like he is shearing and grinding away the known, the templates, with the means at hand, the always changing objet trouvé that litter his table.

Why has Rowe returned to cherished classical pieces from his past? With the radio intrusions and the classical templates braided and abraded around his increasingly spare playing, it seems as if Rowe is working in the tension between his own subsiding voice , and the overwhelming world without focus, the bloody realities sounded since1999's Harsh, and the crushing duo  with Beins on EL001.

How goes the battle? More and more my own language appears to me like a veil that must be torn apart in order to get at the things (or the nothingness) behind it, Beckett said in a letter from 1937. Rowe's process of reduction and abstraction has created a singular language, and it is (I repeat this adjective, I stand by it as being, for me, a most apt one for Rowe's solo work) a harrowing one. Rowe tears at the veil, starting with muteness, resisting loss; he is the musician, for me, who risks everything, as he courts (like Beckett)  what most artists avoid with any number of gestures and bags of tricks - a creative state of aporia. Not aporetic in the deconstructionist sense of a blind spot, nor the rhetorical sense of a sort of fake self-doubt; rather, the aporia of zen koans, of beginning with muteness, of paradox and creating from the state of being at a loss. I think even Rowe's rather well-known rejection of practicing between performances is his way of cultivating aporia, a bracing self-doubt that creates an opportunity with each performance for either complete and abject obliteration, or the creative obliteration (of the known) that accompanies the intention to realize what the poet Robert Creeley said, in reference to Beckett - It was his dream to realize one word that was absolutely self-created.

If obliteration, aporia and torn veils read as being a little grandiloquent, a few more observations: in Rowe's nearly blow-by-blow exegesis of his own EL007 release, one is struck by a couple of things - overall, how much thought Rowe puts into each performance, how many signifiers and linkages are infused into each work. More specifically, and in response to those who confuse abstracted and reduced with lacking the emotional, personal and lived experience of the musician, Rowe notes that the performance heard on EL007, following the aforementioned capitulations to classical music he holds as significant to his personal history, heads into what he calls the death motif. Indeed, on both EL007 and September, the terminus is an intense, engulfing drone that, on the former work, Rowe says reminded him of the Blitz that shook his world in Plymouth when he was a child. On September, the drone yields momentarily to one last iteration of Dvorak, sounding last-gasp, elegiac.

Two weeks following the September performance, Rowe joined a conversation about the music of the Amplify 2011 festival on a music forum. The past is continually altered by the present, he said. That makes me think of how I have come to hear how cohesive and connected, and, frankly, staggering Rowe's body of work is: I now hear 2004's EL001 and 2008's EL007 informed by September's inexorable pull towards further obliteration and a deepening silence.

Rowe's art of aporia is clear in another sobering post he offered on September 25, 2011 - ...for me to perform is extremely painful, akin to visiting the abyss. For example, after the Stone 9/11 performance, I felt as if I had committed those murders myself...deep down I felt depressed, alone, abandoned. Yet Rowe is visiting the U.S. in a couple of weeks, offering more performances, including a solo set here in St. Paul. Does this resonate at all for others in the context of my positing an affinity between Rowe and Beckett? With The Unnamable's last sentence - It will be I? It will be the silence, where I am? I don't know, I'll never know: in the silence you don't know. You must go on. I can't go on. I'll go on?

The notion of aporia applied here to Beckett and Rowe's  work is solely and wholly my own.

Most Beckett quotes from Samuel Beckett: Anatomy of a Literary Revolution, Pascale Casanova