the great ecstasy of the drummer mueller 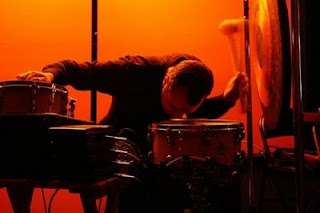 I first heard Jon Mueller live in 2005 at the Acadia Cafe in Minneapolis, in the trio Nom Tom. With fellow psychoacoustic adventurers/ improvisers Jack Wright and Carol Genetti, Mueller coaxed and caressed an improbable array of sounds from an amplified snare drum. The trio was balanced, nuanced and, whatever one made of their sound world, taut with that too rare energy generated by mutual, acute listening.

I next heard him in 2008 kicking ass in the intricately structured rock band Collections of Colonies of Bees, their sonic maximalism and guitar-driven melodies a far cry from Nom Tom's low-volume/high-intensity interplay.

Along the way I acquired numerous releases involving Mueller in several potent projects, my favorite area being his three duo recordings with Jason Kahn. One involves the two percussionists playing paper [Papercuts, a 2004 release on Mueller's superb, now defunct imprint, Crouton Records]. This year Mueller and Kahn had their duo recording Phase released as a digital album on the Flingco Sound System label, a 39 minute slab of metallic shimmer and pink noise, edited and post-produced from live recordings. Mueller and Kahn continue to mine highly detailed, carefully shaped music from what, heard casually, sounds like pretty simple drone works. 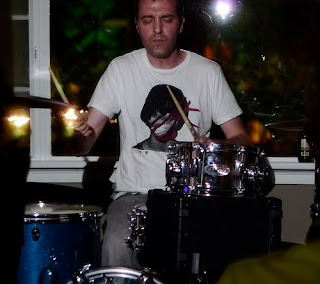 To disabuse anyone following Mueller's work of any lingering notion he is a respecter of taxonomy, there is the 2007 solo drum release Metals, an ecstatic, strophic blast of metal drumming that can induce trance states in the listener, another iteration in Mueller's ongoing exploration of how sound creates states of quietude, one-pointed alertness, and ecstasy. These explorations are extended through both improvised and composed forms by Mueller, the solo drum format being a current concern.

Mueller will be in Minneapolis on June 22nd at Art of This, a venue for experimental music, performing a solo drum piece entitled I almost expect to be remembered as a chair. This latest project, which Mueller intends to perform exclusively through the fall of 2010, is an augur of the soon-to-be-released The Whole, on Type Records.

I have enjoyed both brief conversations and email exchanges with Mueller over the past several years, struck by his unaffected, articulate enthusiasm for sound exploration, the elements of performance situations, and his advocacy for the ideas and projects of his fellows.

Mueller is after something that the drums serve and deliver, something shared with the listener, that roils and teems throughout his various projects. It manifests in different sorts of energy and sound choices, from the micro-sound of manipulated paper, to the pummeling patterns of his metal work outs. It sounds, to this listener, like he is always attuned to the ecstatic dimension of music, working with the wave-patterns, overtones and textures of the drum, resonant and visceral, playing inside both the mind and sternum. It is a great pleasure when a musician pulls from your head and your gut. Check out Mueller's developing drum work, whether solo or collaborative, for yourself.
Posted by jesse at 10:31 PM