it may seem like nothing is happening at all 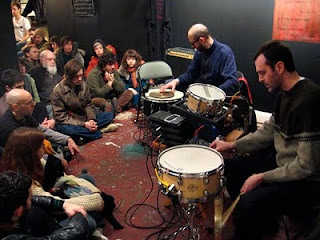 Phase, the title of a 40 minute piece constructed from recordings taken during Jason Kahn and Jon Mueller's U.S. tour of a few years ago, conveys a few meanings. First, it signifies a slight paradigm shift in how this area of music is being made available. Released on FSS, the duo's music is accompanied by a very tactile set of four silk-screened prints designed by Jason Kahn [as well as a cool button]. Listeners familiar with Kahn's Cut label, for which he designed the CD covers, will immediately recognize his visual style in these prints. Phase is available solely as a digital download, an entry in FSS founder Bruce Adam's burgeoning catalog that serves as an experiment in encoding digital albums of long form music. Adams was the co-founder of Kranky records, and sold his share of that label five years ago, launching FSS in 2008.

The second sense of phase is heard in the long cloud form drone Kahn created, editing in post-production from multiple live performances of the duo. The elements of drone music familiar to listeners of the duo's previous collaborations are here- the duration, the overtones and partials, the sound of a metallic tambura holding the center, the duo's seamless fusion of their personalities- but also at play is a shifting of these elements in and out of phase, presaged in the early minimalist works for orchestral instruments and, occasionally, tapes. This phasing produces the beats and secondary rhythms similar to those early works, the off-parallel rhythms generating sonic ripples and resonances. Unlike the systems music of the early minimalist composers, who essentially jettisoned changes in timbre and texture, Mueller and Kahn generate countless layers of continually changing, highly malleable overtones, partials and harmonics, swirling up a long vertical axis that threatens to gyre out of control. The illusion, encountered also in those early works of Young, Reich and Riley, is that little changes, beyond the scrim of the duo's hissing static, amplified cymbals, and throbbing low tones. It's easy, and convenient, to forget that the history of listening to new music is a personal history of being fooled, over and over.

This was brought home for this listener a few weeks ago when Jon Mueller performed his piece for amplified snare drum and electronically processed gongs. Sitting no further than 15 feet away, I was carried along this vertical axis of swarming ghost tones and howling partials, gradually aware I was hearing elements of sound I could identify, and much I could not. I asked Mueller after the performance if there were pre-recorded voices in the din, as I could distinctly hear what sounded like the howl of lamentations in the mix. There was not, to our mutual amusement. I have since learned of the phenomenon of formants, an acoustic resonance created by overtones that can actually mimic vowel sounds, so I am not certifiable just yet.

This experience of the possibility of hearing in yet another iteration of an archetypal music great detail and change, heard here in the physicality and viscera of Kahn and Mueller's joining of percussion and electronics, is bracing stuff. Both musicians have long been about expanding the field of what we hear within a certain degree of stasis and defined parameters. A seeming stasis, apparent parameters; in fact, Phase is a brewing, boiling mass of sound that generates a secondary quality, the seeds of which are heard in the duo's solo works. Releases as disparate as Kahn's Vanishing Point, and Mueller's Metals, own traces of this secondary quality. It is what not a few musicians reach for in similar efforts, something incantatory, a sort of singing that results from that push for what can be created along drone's vertical axis if one keeps pushing. Very difficult to name this quality; it issues, though, from the tension inherent in their work, the self-evident gravitas and sustained concentration of pieces like Phase. It lies just beyond that first threshold of listening to drone; Eno, describing Music For Airports, said it was as ignorable as it is interesting. This doesn't obtain with a work like Phase. There is a sense of timelessness, and of two musicians surprising even themselves. It issues from the cloud of Phase like a ghost choir, tempting me to suggest a new placeholder for this duo's work, like ecstatic drone.


The title of this post is a quote from Jason Kahn, in his interview in Paris Transatlantic, 2004.

Phase is available by following the FSS link above.

Photo: Gregory Davis
Posted by jesse at 1:16 AM

Excellent discussion Jesse. You are doing fantastic work here with this blog.

I spend a lot of time with every release discussed here; it's a strange activity, really, bringing considerable focus to listening, trying to convey what is heard and felt, in a format that is largely unilateral.

I am gratified with the number of musicians who write me privately.

This experience makes me realize all the more how much music is a utility, or a lifestyle accoutrement for most; and that's without reference to music writing/journalism.

That sounds crankier than intended- I am just really into the act of listening these days, a new facet of a long meditation practice.The pervasive ADHD phenomenon in this society is being well observed and documented, I'll try and remain focused on doing one thing at a time.

"The pervasive ADHD phenomenon in this society is being well observed and documented, I'll try and remain focused on doing one thing at a time."

The flip side of ADHD is an ability for hyper focus.

Though I appreciate what you're getting at, I think applying "ADHD" to the idea is problematic (and maybe offensive to some people).

- someone who was (rightly, wrongly?) diagnosed with ADHD

I cannot come up with a reason anyone, diagnosed or merely responding to ADHD as a metaphor, would take offense. Unless they were, to reference another societal malady, looking for offense.