dispel the misery of the world 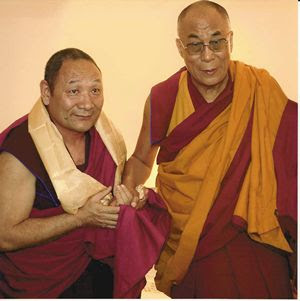 Pictured are [L] Khenpo Migmar Tseten, author, Buddhist chaplain at Harvard, and since 2001, the Tibetan teacher from whom I have received the most personal teachings; and [R] his boss.

I was fortunate to attend 3 teachings given by His Holiness the Dalai Lama when he visited Minneapolis in May, 2001. I had met Lama Migmar several months before this, and the hook was in immediately. He is droll, unnervingly savvy and perceptive about his U.S. students, owns an unerring radar for bullshit, and wants happiness for everyone he meets.

It is impossible for me to express my regard for these two men, except by my inept efforts to try, and fail, and try anew, to act on some of what they have taught me.


For as long as space endures
And for as long as living beings remain,
Until then may I too abide
To dispel the misery of the world.
Posted by jesse at 11:42 PM