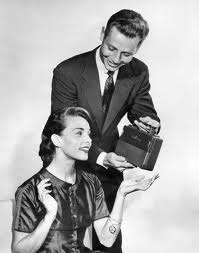 Not content to integrate completely into polite society [he is articulate enough, and sartorially cuts a fine figure], Alastair has launched a radio show, and he controls the music selected. Get to know Alastair's musical sensibilities a little and you will know this is good news for our ears.

I will provide a link to his program blog, consult it for specifics. I get a headache whenever I try to do the math, where time zones are concerned. The last I checked, crow enjoys readers from 29 countries. My head would detonate like an 80s Cronenberg character.

One salient point about Alastair's aforementioned sensibilities- as they say in his adopted home, he doesn't give a stuff about genres, he programs the music he prefers. Happily, Alastair has big ears, critical faculties and is alert to what's happening in adventurous music. Enjoy.

Strangely, the woman in that photo actually does look quite a bit like Alastair's (much) better half... Perhaps if you glued a whole load of fuzz to the bottom half of the man's face he might look vaguely like Al as well...