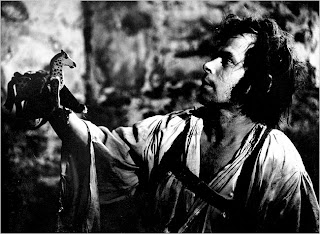 It is with deep feeling and high regard I post this announcement of the death of Bruno S.

Bruno S. is the riveting, unforgettable subject of two films that have never left my favorite films of the 1970s pantheon: The Enigma of Kaspar Hauser [1974], and Stroszek [1977]; the latter was written by Werner Herzog in just 20 days for Bruno S.

There is a compelling documentary from 2003, Estrangement Is Death, in which Bruno S. is revisited, found living alone in Berlin and playing accordion in the streets. Living as a lonesome savant, a lifetime of suspicion of humans isolating him, Bruno S. "channeled"[his term] the piano, accordion and vocal music he performed, powerfully so in one amazing scene in Kaspar Hauser.

His performances in the two Herzog films, the entirety of his available filmography to date, are seared into my consciousness. I have never experienced a film moment as nakedly vulnerable and felt as the scene in Kaspar Hauser in which Hauser/Bruno S. stands at the crib of a whimpering infant, a tear rolling down his cheek, and rasps to the infant's mother, Mother, I feel so far away from everything. 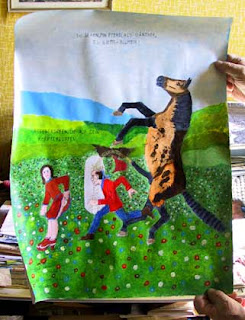 I am truely gutted.

I have no words save for this world will be a darker place without this beautiful, kind soul.

I am also very gutted to have found out that Bruno S had died.
Very late in August,I dreamt that Bruno and I hugged,kissed, then let go. We did not exchange any words. I was about to visit Berlin when I had this dream, so when I look Bruno S up on the internet, I was horrified to see the Obituary columns on him. I did speak to Bruno S on the phone and he was very nice; it was lovely to exchange a conversation in German. I was so happy when I rang him on his last birthda (2nd June). I had a hunch that I wouldn't be able to see Bruno. I did not go to Berlin. R.I.P. dear
Bruno. I will always remember you.
Love from Princess Maria Sviatopolk-Mirski. x x x

Lest anyone imagine otherwise, Priness Maria descends from royalty, in fact from the once owner of Mir Castle.
She won't trumpet the fact however, and I am pleased she visited Crow and shared her story about Bruno S.