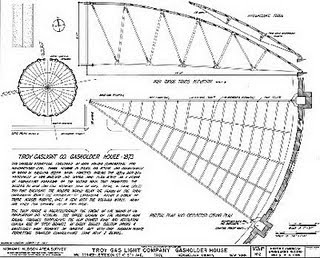 So be it. Evoke the forms. Where you've nothing else construct ceremonies out of the air and breathe upon them. ~ Cormac McCarthy, The Road

This potent line provides the title for a new recording, ceremonies to breathe upon, a bass duo performance by Andrew Lafkas and Michael T. Bullock The picture is a draftsman's drawing of an immense 19th century structure in Troy, New York, dubbed Gasholder House, originally a storage facility for an ironholder of coal gas.

The structure was the site for the bass duo performance in March 2008 of Lafkas and Bullock. Much like the in situ resonances and reverberations heard on the trio release of Axel Dorner, Xavier Charles and John Butcher, The Contest of Pleasures, the site is integrated with evident care by the musicians, who avoid the more obvious possibilities a space with ridiculously slow decay and incredible amplitude offers.

That the trio recording was in the venerable Chappelle Sain-Jean, Mulhouse, while the Lafkas/Bullock duo was in a storage garage for paint trucks, is a sweet reminder that any environment, when encountered and engaged by superb musicians, can be an integral element of the music.

Bullock and Lafkas cast their meeting in an unedited, unspooling, long-form piece. They avoid the sense of the episodic, choosing instead a taut organicity that shape-shifts from an opening cavernous arco drone, to a stretch of thuds, thumps and scuffling [perhaps partially the bassists shifting their footing or playing position within the space], to liquid, lachrymose air drawings. The acoustics, to my great pleasure, never sound gimmicked or exploited. Their integration of the gasholder’s decay and reverberations are measured and nuanced. As the duo’s twinned strings move into the final six minutes or so, the sound between Lafkas and Bullock is pure pull and tug, the lowest sonorities of the basses push/pulled across the environs, reminiscent of Christian Weber’s similarly low-toned taffy sound on Osaka Solo. The piece doesn’t end; rather, as Eric Dolphy famously put it, after it’s over, it’s gone, in the air. You can never capture it again.

I was unfamiliar with Bullock’s playing prior to hearing ceremonies, save his presence on the BSC release, Good. I had heard Lafkas any number of times over the years he lived in Minneapolis, generally within a free improvisation context, and in a couple of stunning duos with Bryan Eubanks.

What is beautiful about this meeting is the restraint, measure and potency the duo sustain, even as the piece unfurls through varying sound areas, maintaining for 43 minutes not stasis, but one's rapt interest, in my case intensely so. It is engrossing throughout, as the self-evident empathy of the two musicians draws you in, as the sustained, floating bass lines meld, interlace and occasionally moil apart. On paper, the project could clearly have gone in less satisfying directions: two strong-willed individuals, setting into the music with the same instrument, performing inside a space with acoustics that can easily yield wowing effects.

What you hear instead is the sort of meld that occurs only when mutual respect, a primary regard for sound and a willingness to move out of oneself towards ceremony is present. I wish I could have been there. This release brings you as close as possible.

Quotes in bold are from Cormac McCarthy’s The Road.
Posted by jesse at 12:45 AM