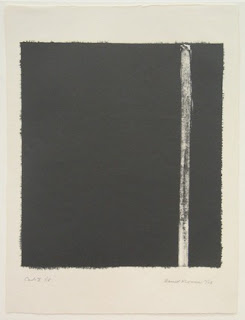 We favor the simple expression of the complex thought. We are for the large shape because it has the impact of the unequivocal.

If you’re willing to listen to all sounds compositionally, you will find that throughout your daily life the world makes beautiful music.

In the Micronesia of contemporary experimental music, Christopher McFall of Kansas City, Missouri, and Asher Thal-Nir, currently residing in Somerville, Massachusetts, create music that is perfectly sovereign, existing inimitably within self-limited sonic spheres. The effect of their music is at times both completely disquieting and compulsive; at other times it comes very close to evoking, alternately, fugue states and the antithetical state of hyper-listening, alertness and absorption such richly detailed, carefully assembled works evince. You can disassociate, dream and float with this music, or drill down and enjoy the meticulous sub-strata of mechanical hiccoughs, veiled rhythms and gorgeous loops and threads that bear the impact of the unequivocal.

Sourdine, the label Asher launched [or, given the laminal pace of Sourdine releases, nudged] in 2007, has produced two works each by Asher and McFall. They are simpatico label mates, but own some very distinct and disparate qualities and approaches as well. If abstract electronic music is Micronesia, Asher and McFall are a sub-region of overlapping waters, outliers in the waters of drone, location recordings and the sourced detritus each enjoy [broken phonographs, tape hiss, airplane engine roar, decrepit pianos and many sounds of indeterminate origin].

Within striations of throbbing drones and unstable, pitch-based murk and grain, lovely melodic fragments come forth, repeat, fade, disintegrate. Some of their sounds seem to issue from depths nearly amniotic, reaching your ear as gradually and subtly as anything, say, Fransisco Lopez has conjured in his works bearing dates as titles. Nearly every piece found in the Sourdine catalog is streaked and caked with the sound of time’s erosive effects, the music seeming to be pulled from great depths and distances, barely rescued from erasure.

Asher especially attunes his efforts to making the integration of memory itself, your memory as a listener, a facet of the music. Listen, as I have, to 14 of his releases over several years time, and it becomes irrelevant, after a fashion, what specific memories are evoked- did I hear that melody in a prior release? Have broken off pieces of one composition been layered into the current work? Doesn’t this pervasive, nearly sub-audible hiss and thrum limn most of Asher’s pieces? The piano melodies in particular, woven throughout much of Asher’s body of work, captured from the continuous streams of classical radio programming, world without end, persist and niggle in the memory; he creates a sense of the incessant, but non-specific, archetypal fragment- you’d swear you know that piano figure, but cannot grasp it. Every familiar and fleetingly particular sound returns eventually to the veiled, looped and threaded larger shape of Asher and McFall’s music. 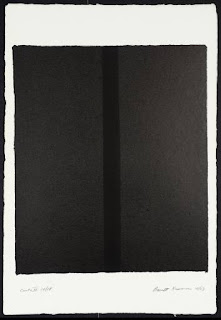 More than is the case with many musicians trawling this region of Micronesia, I simply cannot lift any one Asher piece from the whole of his output and consider it separately. So Interference, a limited edition cassette release on the Semata Productions label, is confluent with the nearly 30 releases that precede it. Some have commented that Interference is a distinct departure from Asher’s sound world in being darker, claustrophobic, even apocalyptically so. I’m not feeling that. What’s certain is his choice of source materials, here principally airplane engine emissions, and his nuanced embroidery of feedback and electronic pulses, are evocative, however boiled down and clarified his materials.

Interference, whatever the title intends, does not sound like interference; the wash of sounds emerge and disappear, satellite winks and gentle, neural pulses. The closer you come to Asher’s sound world, the closer the recondite details come forth. Put your ear on Interference with that in mind and you will come away with the pleasure that one experiences when the act of listening itself seems to draw out what is hidden in the murk and shadows of a thing.

By the way, I in no wise intended to suggest Asher’s considerable stream of release over the past five years are indistinguishable. Or mere reiterations of a basic theme. I mean to suggest that taken as just that, streams of ideas and concerns fleshed out over time, Asher’s musical world is coherent, seamless, and can be regarded as multiples of an endlessly yielding archetype. Asher listens to the world compositionally, or as the Tibetans say, “all sounds are mantra”, if heard from a certain frame of mind.

I am less familiar with Christopher McFall’s work. He too has released an improbable avalanche of works, some 18 or so in five years. The Body As I Left It, as I said earlier, is his second on Sourdine. Here he integrates a broken record player, location samples and a piano presumably sourced from thousands of feet below the Atlantic, judging by the chilling, aquatic sound of it. The record player, at times, seems to provide motoric patterns in several of the seven tracks, hiccoughing a beat on track 3. Track four is reminiscent of Eno’s Music For Airports, as the subtle melody can be measured by breath length. McFall’s approach here displays greater range [not a valuative statement] than Interference, while sharing with Asher a concern for the play of memory, the sense of transience, and the music of the fading and the disintegrating. The Body As I Left It is lush and brooding, generously yielding more and more of its elements with each listen. It is McFall’s work that I find more sobering, even occasionally sinister. He has, like Asher, produced a work whose mark is indelible and unequivocal. 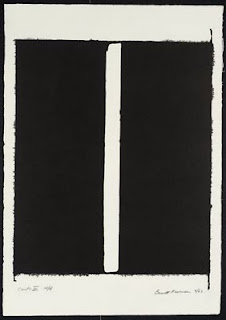 Both of these musicians bring to mind Barnett Newman’s 18 Cantos, which the painter maintained were meant to evoke music; Newman re-creating auras in his multiples, Asher and McFall generating force fields, seemingly monolithic and steady-state, but in fact pulsing with a similar energy to the lithographs.

The impact of these large shapes, unequivocal.

Jesse, thanks for turning me on to Asher's work (many moons ago), I'll have to check out McFall.

My pleasure, Darren, in this case unequivocally.