i am the holy ghost 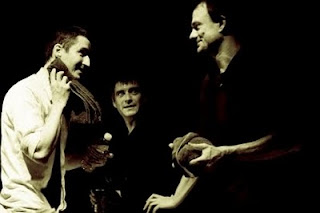 You wouldn't know it from reading this blog, but I am an apostate of the church of free jazz. From around 1975 to not so many years ago, I amassed, attended to and proselytized around the fire music of Ayler, Brötzmann and other first generation improv pentecostals. I have an endless supply of the sorts of war stories that attend such evangelism- the alienation of affection that tears houses asunder when true believers spin Kalapurasha McIntyre's Humility In The Light of the Creator during dinners with in-laws; the room-clearing effect Cecil Taylor/Jimmy Lyons/Sonny Murray possessed in the 70s, despite affinities of blood and marriage; enthusiasms riven by tears and genuine entreaties by partners attending concerts ["can we just go, please?"].

Even as my more aggressive outreach to others cooled, becoming a fatuous and self-serving sense of superiority [witnessed aplenty by today's devotees of EAI and noise, of course], I carried the flame for free jazz through the ensuing decades of permutations, even as that area of music became moribund and, inevitably, codified and markedly unfree.

For nearly 10 years I steered clear of my own record collection, having exhausted the sides I accumulated in pilgrimages to record stores like Rick Ballard's Imports in Berkeley [where, in 1986, I drained my savings account upon discovering Ballard's bins held the complete FMP catalog in used and new editions]. I sold off 350-400 albums throughout the waning years of the 90s, retaining only what I regarded as the Tanakh at that time- the first edition ESPs [Ayler! Bob James!]. I occasionally revisited the Horos, Saturns and Incus treasures that had cost me so much affection and troubled so many friends and neighbors, but essentially fell away from the ecstatic glossolalia of free jazz until around 2005 or so.

What accounts for my prodigal return to the pews of the New [Old] Thing? Hard to say, as with every passing year what guides my attention in music is intuitive, attuned to pleasures and interests outside of the constraints of genre or the onus of aesthetic criterion like is it new? Is it, in some Platonic sense, authentically innovative? Having dived deep and surfaced for nearly seven years now in the different waters of EAI, I am content to listen to whatever improvisation reaches me through whatever sensorium. I have known the samadhi induced by drone, the pleasures of the ineffability induced by onkyo, and spent more hours than my readers might believe dwelling in the nerve-ending interstices of silence and near- silence found in microsound/ultraminmal music [Sugimoto, Malfatti, et al].

I intend this less as an apologia than as an amusing setting forth of the bona fides I bring to hearing The Ames Room's In, the 2008 recording of the roots and branches of Ayler's holy hell raised by saxophone-bass-drums.
Will Guthrie isn't close to exhaustion in his plumbing of free jazz for its inexhaustible joy, frenetic esprits de corps and unabashed high intensity/high volume working methods. Guthrie, along with saxophonist Jean-Luc Guionnet and bassist Clayton Thomas, create music in a great range of areas- the concrete of works like Guthrie's Spear and last year's fantastic, improbably concise Spike-s, the noise of Cinabri, his duo with Ferran Fages, and now the fire-breathing, pummeling trio of The Ames Room.

Trane was the Father, Pharoah was the Son, I am the Holy Ghost.
~ Albert Ayler

Like Ayler's music, with its roots in R & B and the church, this trio maintains an exultant, dancing quality throughout the records' two 20 minute live performances. Dubbed maximal minimalist terror jazz by Guthrie, approach without concern that the music is brutal or bruising. In fact, the trio sings, swings and gallops through their paces, with a cohesion and unity that suggests considerable playing time together. Guionnet is more virtuosic than Ayler, spewing endless, sinuous lines on the alto sax, often cantilevered lines on which Guthrie plays in and out of time, at times locking into tongue-and-groove sections of the trio dance. They are a little reminiscent of the Trevor Watts/Barry Guy/John Stevens trio of No Fear.

The best aspects of fire music are heard here- music that is at once visceral, articulate and determined to move the body [think Marion Brown or the testifying of early Shepp, informed by the trio's respective experiences in elecro-acoustic settings]. Obviously if you have decided Ayler's lineage is exhausted, played out and dead-on-the-vine, you may have trouble attuning to the trio's self-evident joy, writing in the air with brazen, ecstatic tongues, another testament of the holy ghost. For this prodigal, returning to Ayler's well after many years and divergent roads, The Ames Room is the perfect chorus. 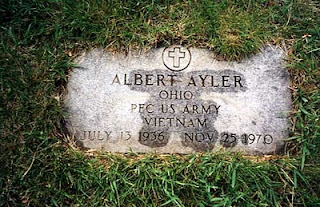 Will told me he cut his teeth with Mark Simmonds' Freeboppers, an Australian sax player who afaik has only released one album (a 2-CD set entitled "Fire"). When I lived in Sydney I got to see Mark and his pianoless Freeboopers quartet a few times. One of the best bands I've ever seen.

Thanks for reading and the comment, Darren.
Will has a sister here in Minneapolis and visited here 2 years ago. He gave me that Freeboppers recording, saying he loved Simmonds' work. He was 18 or so when that was recorded.
Will has a very healthy disregard for the lines drawn between areas of music.

As a listener and player, there was a time when only certain genres would do. But my desire to play led me into situations with musicians from different backgrounds and styles, and by staying open I've had some very rewarding musical experiences and discovered some cool hybrids.

Joe, thanks for weighing in.
Who are you? [I can not post your identity if you prefer].

I live in Vancouver, I'm almost 60, I play trumpet and other things, mostly improvised situations ,sometimes performing.(There are some recent clips on Youtube under the name Holohed).
I really related to your coming back to an appreciation of free-jazz.
Wanting to play led me to collaborate with minimal-techno,punk,prog-fusion musicians in improvised situations,and led to some regular groups and some musical fun.