on behalf of the raw object 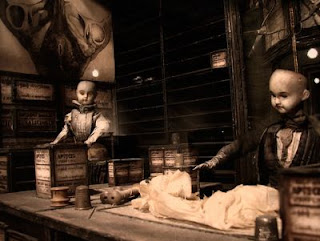 There are few things in my experiences of hearing new music more gratifying than the serendipitous discovery of a heretofore unknown musician whose sound world links to favorite and familiar artists.

In 1987, the Walker Art Center curated a Brothers Quay film fest, introducing me to works like The Cabinet of Jan Svankmajer, Street of Crocodiles, and The Epic of Gilgamesh. It had been nearly 10 years since I had my head blown off viewing David Lynch's Eraserhead at a midnight Bijou in Iowa City. The Quay brothers stunning animation of doll parts, wood screws and raw meat [among many other quotidian and improbable objects chosen to visually explicate the narratives of Bruno Schulz, Kafka, et al] opened up many doors for story-telling and film language in animation. Like Lynch, they seem to be drawn to animating grotesquerie and the unsettling and fantastic. Viewed another way, they have simply been bringing to life the stuff of those abandoned and neglected drawers, cellars and recesses that populate our dreams. Bringing to life meaning giving these murky and frequently deformed beings a stage, with music and dance, on which to show themselves for our cringing enjoyment.

I have no idea if visual and sound artist Mathieu Ruhlmann has viewed the works of the Brothers Quay. It is, however, no surprise Ruhlmann is drawn to the poetry of Francois Ponge, whom he quotes in the liner notes to his 2010 release as a leaf or a stone. Ponge published
many works that also present everyday objects [food, furniture, books] as having a voice, and, despite their appearance of inanimation, an elan vital. Like the film-making twins and Ruhlmann, the poet found his material and sources very near at hand. Ponge's best known translated work, in fact, is entitled The Voice of Things.

The title atop this page comes from as a leaf or a stone's liner notes, an apt phrase for what Ruhlmann achieves on the several works of his I am familiar with. Ruhlmann builds musical episodes and dream fragments from bird skulls, denture cleaners and the like. He is authentically elemental, his music sourced from paper, metal, water, wood, pine cones and unnerving snippets of human voices. When I hit the 5th or 6th listen through as a leaf or a stone, I thought, this sounds like The Brave Little Toaster as imagined by Lynch [in fact that 1987 little charmer was the work of several future Pixar talents. House-hold objects do come alive, but they sing show tunes penned by Van Dyke Parks, not concrete manufactured from skulls and kitchen scullery]. 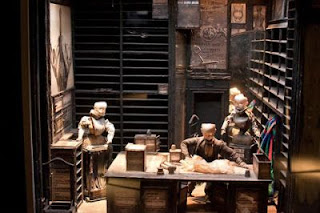 Then I revisited the Quay brothers imagery, and the affinity between Ruhlmann's ruminative found objects and the Quays' dramaturgy of doll parts and animal skeletons was clear, and was sustained as I listened through his work while looking at stills from the last two decades of the Quays' films.

Frequently, throughout as a leaf or a stone's six discreet tracks, there are sounds that might be the creaking, churning gears of Ruhlmann's imagination itself, the mechanized hum of another world, as Donald Fagan had it. Perhaps I am overly-smitten with the Quay affinity, but I hear Ruhlmann's work as equally a stage for his meticulous sonic scraps, and a reflexive portrait of the director, his dreams and fantasies worked out with kitchen utensils and an unbridled imagination. 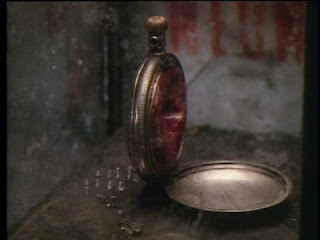 For all my efforts to articulate the ghost-world Ruhlmann populates with his nuanced, insistent, sometimes sinister sounds, there is genuinely something ineffable here. You can hear it for yourself, something just beyond the groans, drones and plangent music. Another way of approaching the thing, the poet Ponge wrote, is to consider it unnamed, unnameable.

as a leaf or a stone

Photos: stills from the films of The Brothers Quay

The title comes from a statement by Francis Ponge, found in as a leaf or stone's liner notes:
May my work be one of continual rectification of expression on behalf of the raw object...

A wonderful post Jesse, thank you. Great to see you referencing Ponge in such an apposite way. Based on this, I'm going to familiarize myself with Ruhlmann's music.