the sense of multiple worlds 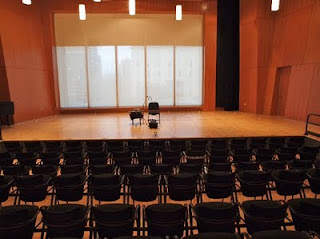 Time, of all things, will not permit me to write at length about the world premiere in Minneapolis on May 7th, 2011, of Michael Pisaro and Greg Stuart's A transparent gate [with six panels]. These few photos, and my few words, will not convey the intensity of that hour; it was the quietest performance I have ever attended, replete with tortuous audience audio - chairs and men alike groaning, programs noisily, pointlessly consulted while a triangle decayed in the air, stomachs complaining of missed meals, motorcycles passing outside the fantastic Anotello Hall environs.


There was for me, eventually, absorption and single-pointed attention, as well; the six sections of this work-in-progress were joined, like many recent Pisaro works, by silences that the audience generally regarded as rests in which to move about and discharge whatever noises they had [sort of] contained for the prior ten minutes. The efficacy and integral placement of these silences couldn't have been better underscored, as annoying as this was, than by their serial breach by this audience. In other words, I was mildly shocked, then amused, that to a crowd unfamiliar with the Wandelweiser apotheosis of the ultra-quiet, the bardo between sounds meant make a move. To my ears [and happily, to my son's, who has heard only a little of Pisaro and Stuart's work prior to attending this performance, yet said afterward the silences were "unbelievably intense"], the six panels are successfully framed by each developing silent interstice. 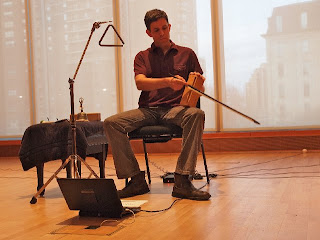 The music?- simply beautiful - concentrated, caroming and pinging around the space, flyblown gently through the air by the spidery spatialization of eight small iPod speakers, music without waste, self-conscious gestures or calculated effects. Stuart was pulling off a mobile meditation of sound, something I remarked on following the show. Whether the panels consist, at any given moment, of a few spare, micro-tonally tweaked pitches hanging in the air an improbable moment longer than seemed possible, or of the forceful whoosh! of massed bowed wood blocks, their presence in this piece recalling their deep layering in the striata of July Mountain, there is no waste, no extra; there is only the ventilated, aired out tones and spaces that blow through Pisaro and Stuart's growing body of collaborative compositions. 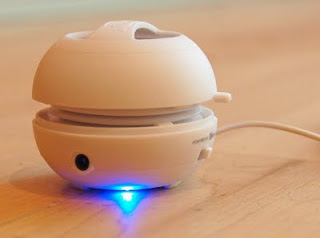 David Tudor once said, in reference to his role in realizing Cage's compositions, that as a result of the freedom Cage afforded him in sound choices, I feel alive in every part of my consciousness. This is, if I may use such a full-blooded word about music that can be so spare it necessitates an improbable acuity of attention from us as listeners, what is so god-damned glorious about this duo's work - I am, as I listen, alive in every part of my consciousness.


Some panels of A transparent gate [with six panels] will be heard this September at the Amplify 2011 festival in N.Y.C.

The sense of multiple worlds in the title is taken from Pisaro's program notes, quoted in part as follows:
That stillness runs parallel to everything we do–as a dimension of reality invisibly interwoven with the world of objects.
That we can hear into the stillness only opaquely; only through and with the natural commotion of an environment.
The sense of multiple worlds penetrating each other without however coming into physical
contact.
The necessity of accepting flow and change, of the inevitable movement from neutrality to joy to disaster and onward.
That sound is a remnant of a physical process, not truly a thing unto itself.
These are a few of the thoughts that emerged from the process of working on A transparent gate 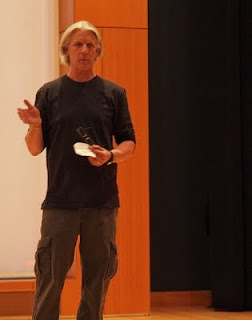 I did not say so in my introductory remarks at the concert, not wishing to draw attention away from the music, but I am honored Michael has dedicated A transparent gate [with six panels] to me. Thank you, Michael and Greg, for the music.
Posted by jesse at 11:37 PM

Between the Minneapolis and NYC performances, there will be one in Chicago on 5/19/11. Thanks for the description, Jesse - I'll be sure to only move my chair while Stuart is playing.

you are in for a great hour of music, bill, enjoy.

This was a lovely review. I hope to see this at the Amplify Festival in September.