take out your spell for me

And there I travel, looking, looking breathlessly.
~ Don Juan


No doubt many if not most readers of crow regard the linkages I make between things musical and extra-musical in these pages as my being fanciful [and that only occasionally with success]. No sweat - one reader's kismet is another reader's karma is another's blind idiot god. I mention this as these small efforts are always occasioned by such effortless links, happy synaptic surprises, for which I say "thanks!"

This time around the unmapped intersection is my simultaneous revisiting, after 40 years, of Carlos Castaneda's 1968 classic, the peyote-soaked, pseudo-anthropological study of the brujo Don Juan, The Teachings of Don Juan, A Yaqui Way of Knowledge, with my many listens to Anáádiih, a collaboration of phonographers Mathieu Ruhlmann and Banks Bailey.

If you are unfamiliar with Castaneda's work, the briefest of sketches; the book is a very strange account, a sort of synthesis of an academic précis, and Confessions of an English Opium- Eater, involving an anthropology graduate student hanging out with a Yaqui indian, who serves as his guide through a number of consciousness-altering experiences. Some are fueled by Castaneda's ingesting peyote and other organic, psychedelic herbs; others involve shape-shifting, dream-work, and the like. All of these alternately harrowing and comic episodes take place in the Southwest desert, amongst generally taciturn indians who frequently howl with laughter at Castaneda's morning-after accounts of his experiences Critters factor into many of the earnest, freaked-out grad student's tales, including, in a most significant passage, crows.

As I said, this is a book I have very recently returned to, one recalled fondly from my youth. Returning to the books' environs [Arizona and Sonora] to soak in the nocuturna, flora and fauna, and the indelible sense of Otherness encountered in the most natural of natural worlds, I find in Castaneda's prose aspects of what is found in listening to Anáádiih. More on this connection in a bit.

You can be forgiven if you come to this completely unfamiliar with the name Banks Bailey; he has released, since at least 2008, numerous works, but some on a Belgian net label, some releases being runs of 10 copies, you know this map well if you're still reading. Many of Bailey's works are culled from field recordings made in Ohio and Arizona, privileging birdsong and water-sources, assembled via meticulous mic placement and keen ears. Bailey brings his Arizona
surroundings, suffused with sky-shattering bird screech and close-miked insect swarms, to the duo's collaboration. His world overlaps the Apache National Forest, and he brings its sound world to our startled ears with clarity and force. 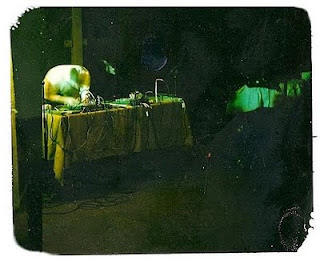 You are less forgiven if you fail to recognize the name Mathieu Ruhlmann, as crow recommended the Vancouver artist's abundantly rich work last October. How Ruhlmann and Bailey stitched together the enveloping animalia of Anáádiih, I don't know. Whether their collaboration was from a distance, the keening and baying of their respective environments conveyed digitally, or, as I prefer to fantasize, huddled together around an open fire, phono-stitching snippets of British Columbia and the Navajo territories into the crazy quilt of Anáádiih, it little matters. The work's layering of critters' cries and events [there is a distinct narrative feel, breaking forth explicitly in a passage of sturm und drang bearing the true meaning of this hackneyed phrase-storm and urge] is fantastic; as much as I admire the decisive moments caught in the field recordings of documentarians like Chris Watson or B.J. Nilsen, Anáádiih owns the potent story-telling that is possible when phonographers like Bailey and Ruhlmann, or kindred spirit Eric La Casa, point their mics carefully at the natural world, and then get to work.

As I read Castaneda and listened to Anáádiih, the sad fact comes forth - for those of us who live among tall buildings and do not count among our allies a brujo or another source of crazy wisdom, the sights and sounds of these worlds will sound alien, unnatural, Other. Ruhlmann and Bailey provide a taste of that Otherness without the harrowing aspects of ingesting datura, or leaving our safe havens under familiar skies.

I remain intrigued, no matter how many spins I have given Anáádiih, at the strangeness and the allure of many of its sounds. This is a work that casts a spell; as Castaneda discovered, there is the possibility of expansion when we surrender to such spells. Ruhlmann and Bailey can give you glimpses of the unheard natural world; it's up to us to call back.

Today, take out your spell for me. Happily I hear again. 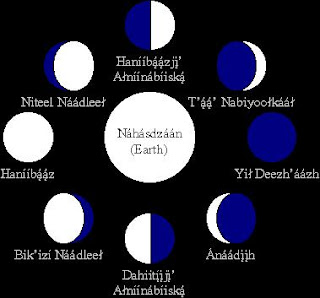 Don Juan, quoted in The Teachings of Don Juan: A Yaqui Way of Knowledge

Title and closing lines from House Made of Dawn, a Navajo night chant used in a healing ceremony; a few lines are included with Anáádiih.

Picture of the Navajo moon cycle, a distinctly separate cosmology from the rest of the world; Anáádiih is the name of the waxing crescent moon.

I strongly recommend several other Ruhlmann releases, all quite distinct from what is found on Anáádiih, specifically Gravity Controls Our Myths [2008], and Fourteen Worms For Victor Hugo [2009].