in praise of the swarm 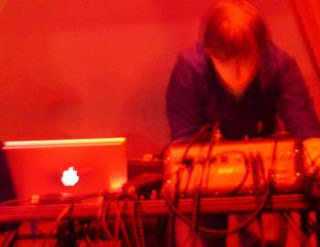 This summer I was reading Multitude: War & Democracy In the Age of Empire [Michael Hardt and Antonio Negri, Penguin Press, 2004], and came across an intriguing descriptor that I copied for my records, thinking I might find a home for it in a future music review. In a passage describing the political concept of swarms, almost always used as a pejorative [think sheeple], the authors note, admiringly, that Rimbaud flipped the word, making of it an encomium. In his 1871 hymns to the Paris Commune, the poet sang of the communards’ anarchistic spirit as the “music of the swarm”. Critic Kristin Ross, writing of Rimbaud’s Illuminations, observes a sound-quality in his mad prosody she calls “insect verse”, and elaborates, “…[Rimbaud’s poetry] is a force field of unassigned frequencies, ominous or lulling, depending on the context.”

In the maelstrom and transitory lulls of Joe Panzner’s Clearing, Polluted, a three-part work he developed over the past two years in fits and starts [necessitated in no small part by dint of becoming a father, while persevering through a doctoral dissertation in musicology], I hear a force field of unassigned, sometimes ineffable frequencies. They are indeed alternately ominous [the extreme low-end frequencies that roil and gather force midway through the first section, Young Theorist], and lulling [the oscillating, consonant drone that concludes this section]. There is insect verse as well, sections of furtive clicks and rattling reminiscent of the scurrying and scattering guitar abuse heard on Kevin Drumm’s first few releases. The ferocious second section, Hindsight Is 50/50, might in fact be reductively referred to as the sonic love-child of Drumm’s Sheer Hellish Miasma, and Julien Ottavi’s Nervure Magnetique, raised in the nursery of Francisco Lopez.

These little passes at clever referents help convey a sound area, but also compel me to say I do not hear Clearing. Polluted as being derivative; on the contrary, I consider this surprising release, alongside the current work of folks like Jason Lescalleet, Mike Shiflet and some of Daniel Menche’s stuff, to be nearly redemptive in an area of music as stagnant and surfeit with shoddy releases as can be found in any genre. Panzner brings an acute attention to detail and precision to what his playing partner Mike Shiflet once dubbed “excess audio”; spatial detail, clearly obsessive levels of sonic-sifting for the most organic [read, not contrived or precious] elements of tension and release, and an improbably mature grasp on the possibilities of the entire frequency range. If your ears are high or low-end aversive, wait a while; the scope of Clearing, Polluted yields rich, if occasionally pummeling, sounds from across the dynamic range. While it is not as crucial that you listen with your fingers affixed to the volume control as, say, listening to Julien Ottavi or Giya Kancheli [the latter’s work rivals any noisenik’s for jolting the lulled listener out of their seat with his self-described “battle scene” passages], have a care if playing Clearing, Polluted around sonic tourists, or dogs with a high startle response.

I called this a surprising release, as I think even a reasonably seasoned listener to this area of music would not expect a work of such impressive structure and range to come in the trickle of releases Panzner has issued over the past five years - a couple of CDRs in 2006, a few stellar documents from Scenic Railroads, Panzner’s duo project with Shiflet, between 2004-2006. Panzner’s mastering of Shiflet’s essential, self-released 2010 work, Llanos, was a clue for attentive listeners that he has mad skills in that area of production. Nonetheless, I wasn’t prepared for this jolt of beauty. Clearing, Polluted enters the field of similar releases with assured blasts of gravitas and fury, and never treads water nor falters. Much of its 46 minutes is comprised of swarms of meticulously assembled noise that reminds me, oh yeah, Panzner-the-composer makes of swarms of noise what other composers construct with blocks, or sheets, or notated measures of sound.

I have listened through Clearing, Polluted many times; easily annoyed, and quick to bail from the extreme areas of the noise continuum, I am happy to report we have one more musician who brings both viscera and intelligence to the squall, both density and fine detail, and hits the pavement with a clutch of ideas in his fists. Massive, but also deft and brisk, and at times grippingly melancholic, Clearing, Polluted is the happy surprise for this listener of 2011. I am hard-pressed to imagine anything being released in the balance of this year that would dislodge it from my few, favorite releases of 2011. I am pleased to see it come out on Richard Kamerman’s Copy For Your Records imprint. May it not get lost in the ridiculous deluge of releases this year, as is, of course, the fate of any music with guts and ideas issuing from similarly small imprints.

The swarm metaphor was swiped from Kristin Ross, The Emergence of Social Space: Rimbaud and the Paris Commune, Verso, 2008

i had, for a bit, considered putting the epigraph for D+G's anti-oedipus on the disc itself (now, probably wisely, just solid orange)...

'we must die as egos and be born again in the swarm, not separate and self-hypnotized, but individual and related.' (henry miller, sexus)