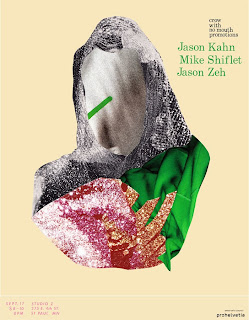 The third Casey Deming flyer for the 2011 crow concert series. The first was after Ellsworth Kelly, the second Agnes Martin; these were the artists I suggested to Casey for inspiration. On this one, he worked in the sort of collage area seen on many of his posters for the Tuesday Night Improv Series here in Minneapolis. The Tuesday Night series dates back many years; it was originally curated by bassist Andrew Lafkas. Casey holds down that task now, so his poster art is flourishing.

I am close to returning to writing for crow again; in August I was asked to write liner notes for two imminent CD releases, as well as a couple of press releases for labels I respect a great deal.

As always, thanks for reading.