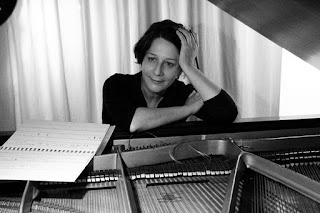 I am, presumably, similar to many of you who read these sorts of reviews; we occasionally suffer from a surfeit of challenging music, with the peculiar symptoms of information-sickness and innovation-enervation, the predictable consequence of avidity in extremis, of too-much-of-a-good-thing-is-a-bad-thing. The anodyne that acts most immediately, for me, is silence; the middle ground is discovering music that has a little surprise in its folds, what I consider fresh tangents, as very little comes along in a lifetime bearing that most potent medicine, radical innovation.

Sometimes my delight is in the perfect storm of musical surprises, when the where [geography], the what [in this instance, two instruments so overly-familiar as to raise in us a demand for a fresh yield of surprises], and the when and how [delivered to us from a label so small, it has folded from a largely cd-r catalog, chronicling the work of many musicians completely unknown even to improvisation's miniscule market share, to a digital download net label, and struggles mightily to survive at all - and is based in Florida!].

I am referring to Travis Johnson's Ilse imprint, for which I wrote the liner notes for one of the label's last releases. Johnson's efforts to maintain Ilse are hardly the stuff of sob story nor self-pity; what I know of his efforts does convey a familiar story of obsessive fidelity to a music that risks failure so intentionally, madness [and the concomitant financial stress] eventually ensues.

Let me break that down - the where is Argentina, the what is a piano approached and sounded from every conceivable angle, and an analog mixer with the inputs connecting to the outputs - you've heard this before, right? - and the when and how, as I said, is music borne from a parlor recording made in a musician's house in Buenos Aires, by a Floridian who just loves this kind of shit. The result is piano + no-input mixer, the duo of Ana Foutel and Federico Barabino.

As I have said Ilse documents music that risks failure intentionally, let me quote Barabino briefly - ...the error as a starting point for an exploration often denied...and a continuous search inside and outside margins are the very concept of this way of working. Much about this surprising release bears the ethos of courting error - the infiltration of the duo's playing, not by edited/integrated field recordings, but by the traffic outside their session; the plangent creaks and groans of Foutel's floors as she moves around the piano; the unwieldy, unstable sine tones loosed here and there, shooting through the sonorous piano clouds with an impertinent disregard for complementarity; and, still for many, the vast stretches of near silence, in which it occurs to one perhaps Barabino [and occasionally Foutel] have left the room. 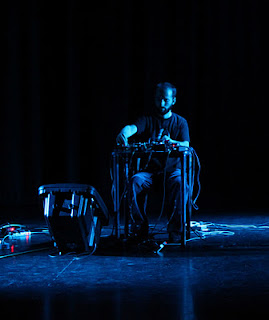 In fact many listens will clarify that this duo are playing with keen, alert listening skills, a restraint that is signal of their respect for making the right sound, and that, to my ears, Barabino is always lightly limning and framing Foutel's pianistics, which are considerable. Barabino's mixer is emptier than many of his contemporaries here, and I suspect that is entirely intentional, given the results. Connecting inputs to outputs can raise holy hell, especially when the approach, as Barabino states above, is to move in and out of the margins of sound. That his playing serves the duo so well places him on my radar for future projects. 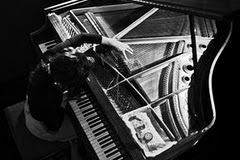 Foutel is an accomplished pianist who also moves in and out of the margins, as well as the pedals, keys and soundboard of her instrument. If I place too fine a point on her amazing technique, or the endless, liquid transitions from caress to pluck to rubbing to melodic inventions, I am afraid you will think meh, a catalog of techniques. Yes, in the service of two episodic unspoolings of potent improvisation, a considerable revelation of technique. But not a catalog - Foutel has integrated her approaches too deeply, and plays with too much regard for space, nuance and suggestion, to be guilty of exhibitionism.

She is the author of a 63 page primer of prepared piano, entitled El Otro Piano, demystifying the nuts and bolts method that yields such orchestral sounds. But again, all of this serves up piano music that swings, sways and, as often, ellides from one mood to another, at times desolate and bare-bones, at others a sort of hammered romanticism that animates Foutel's fierce, tough, beautiful playing.

As a duo, Barabino and Foutel manage to evince a quite rare quality in encounters between improvising musicians wielding such disparate sound-sources - an unmistakable respect for the encounter itself, for the ground shared, and for the vast ground between them. explored in an affecting, but slightly at-a-distance, parallel play.