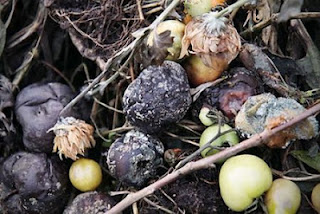 Next to the temple on Bush Street was a grocery store run by an old woman. Suzuki Roshi used to buy the old vegetables there. Finally one day the woman said, "Here are some fresh ones. Why don't you take them?"
"The fresh ones will be bought anyway," he answered.
~ David Chadwick, Crooked Cucumber: The Life and Zen Teaching of Shunryu Suzuki
I want to find some kind of instrument from abandoned objects. So I used clockworks, typewriter, and telephone. I want to suggest to the audience that these kinds of objects have their own sound.
~ Ryu Hankil, Impakt

Imperfections in script, verbal pauses, and poor phrasing are regularly passed over in the greater purpose of communication, yet they always threaten to break out into an impassable noise and cause real havoc.
~ Douglas Kahn, Noise Water Meat: A History of Sound In The Arts

There are essentially seven improvising musicians working in Seoul who have managed to reach the ears of intrepid listeners far from their home-base [yes, dammit, intrepid - the informed and encoded chat about this area of music on various social fora would suggest we're discussing a branch of free improvisation that bears some orienting and soothing signifiers from familiar antecedents - most often we're not, it doesn't, and from time to time let's be uncool enough to recognize the guts, curiosity and patience required to get past the sweeter meat and closer to the bone]. They are Park Seungjun, Ryu Hankil, Choi Joonyong, Hong Chulki, Jin Sangtae, Joe Foster and Kevin Parks.Three Seoul-based imprints have made this crew's work available - Ryu's Manual label, Choi and Hong's Balloon and Needle, and Bill Ashline's Celadon. I have amassed around 20 releases from this small pool, and can report there is a considerable scope and range to be found in their various collaborations and events, documenting their activities of the past six years. I can equally suggest that one can find, particularly in the harsher work of Choi, Hong, Jin, Park and Ryu, elements that have made their releases of the past several years some of the most uncompromising music I have heard. Uncompromising suggests a music that ennobles the listener for, well, being intrepid. The truth is, I anticipate each new release from Seoul with a surprising fondness for what I trust will be a frequently bruising and rough ride. The surprise, for me, is an appetite developed over a few years and many close listens to the Seoul group for their aforementioned elements of sound.

The elements? They love the cast-off and broken, they clearly love ugly, they begin their improvisations at the threshold where most of us, upon reaching it, linger only briefly, and they risk failure with a bracing brio that suggests they love stretching the tightrope as tautly as possible, and at the dizziest heights of anyone improvising today.

The Suzuki Roshi anecdote recounted above is expanded upon in Chadwick's biography of the man most responsible for planting the seeds of zen in U.S. soil, and whose life was an extended, improbable improvisation that tossed every expectation borne by his students ass-over-teakettle into the authentic, crucial confusion and crisis that makes an immediate experience of the new possible. Chadwick reports that Suzuki's wife would be understandably dismayed at his bearing home from the market his ugly produce. I felt sorry for them, he'd say, no one else chose them. A goofy, if affectionate glimpse of the Roshi, sure, except that his predilection for the cast-off and ugly was utterly sincere.

This aspect of Suzuki's sensibility occurred to me when I was writing my first piece about Seoul frequencies, and has percolated since. The crew loves ugly - amongst them, only Ryu's chattering typewriters and timepieces, and occasionally, Hong's whirring turntables, offer an assuaging, familiar sound. Abrasion and plangency are the framing devices for their individual gestures and actions. Where their contemporaries, such as Malfatti, Sachiko M, or any number of other practitioners of the ultra-spare draw the listener to the center of their sound by reduction, near inaudibility and the like, the Seoul group compel you to listen to the mistakes made by the broken technology littering our lives, with no less meticulous attention to structure, dynamics, paradox and surprise. This last is why I think two local noise musicians I introduced to their work called it "academic noise", meaning, by my lights, the Seoul frequency group is interested in more than pole-axing you. 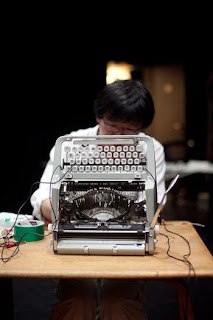 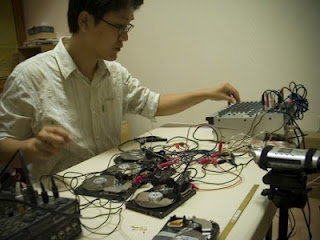 On Inferior Sounds, Chulki, Ryu and Choi animate their disjunctive, sputtering and spitting sound-makers in two 29 minute teeth-shaking improvisations. Snare drum, broken portable CD players, turntables unsullied by records, and contact mics generate noise far too tactile and unpolished to be regarded as academic, or artful. What I hear is closer to the initially appalling beauty of The Brothers Quay, who choreograph both wood screws and scraps of meat with fantastic pirouettes and jeté, and dramatize the nocturnal and miniature worlds of limbless, glass-eyed dolls with unironic tenderness. The trio are neither simply going for your throat, nor studied and airless enough to be regarded as academic; they love that ugly produce, so much so they set aside the lap-tops and guitars they've all been associated with to bring the roughness, the rudeness and the ruckus.
...the sounds we make seem to be received as inferior to the sounds from a laptop, Choi said about this release; but we think that the sounds made from friction, gravity and elasticity of the real world without any processing are the real sounds.
Not inferior/superior, nor hierarchical, real. 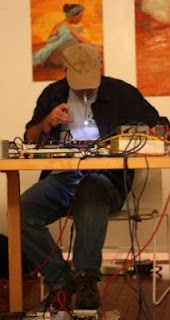 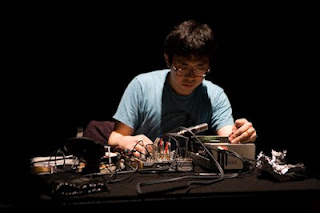 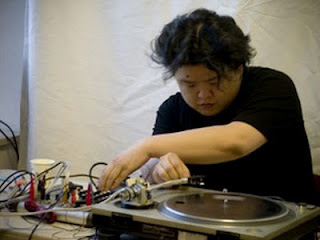 By contrast, it's easy to joke that Hong and Jin's trio date with Kevin Parks, 音影, is easy listening. Well, all things being relative, easier. Parks, as much of a sui generis guitarist as anyone I can think of, seems to ameliorate the ugliest fruit with occasional bright chords, swells, sustains and laser-like slices of tonality. This is not to suggest Parks remotely controls the affair - Hong and Jin offer rough and tumble dynamics, with the trio sounding at times like, well, improvised guitar with two percussionists. Bearing in mind whom we are referring to, the second track actually sounds at one juncture as if Hong is doing press rolls on his empty turntable, while Parks and Jin trade bleeping and squelching fours. Track five, a beauty, offers guitar- glimpses of McLaughlin's Extrapolations period, with a looped bird song, and the sense, as on most of the Seoul crew's recordings, of distant, grinding gears at the edges of the stereo field. Released on the Celadon imprint, the recording and the design are lovely, bearing the touch of the obssessively quality-minded Bill Ashline.

As Kahn has it above, the Seoul group unfailingly threaten to break out into noise and havoc; somehow their energetic affection for, and integration of, the ugly, the broken, and the failed, makes their music sound, to my ears, so much more intrepid than many of their peers.

Thanks to Bill Ashline, for permission to lift from his yet unpublished paper, Low-Fi Values and Hacked Electronics: On The Aesthetics of Contemporary Korean Free Improvisation the quotes from Ryu, Choi and Kahn.

Kevin Parks' several collaborations with Joe Foster all merit your immediate attention; the duo's 2010 release Acts Have Consequences owns the status of being genuinely unlike anything else I heard that year in this area, and while I happily placed it on my best releases of that year, I did not find the words to write about it.
Posted by jesse at 1:46 AM