a kind of carving out 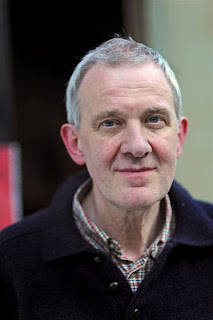 We have reached a point, in 2012, where we can begin to appreciate, assess and critique what Jurg Frey calls the most important conversation occurring along the Wandelweiser continuum; that is, the conversations in the music itself. With the perspective of twenty years of creativity, a considerable performance history, and the extensive documentation provided by the Editon Wandelweiser catalog, as well as labels like Erstwhile, Another Timbre, B-Boim, et al,, we are able to hear how a given score/composition is taken in varying directions by a growing number of musicians who somehow maintain a sort of fealty to the Wandelweiser spirit, while imbuing that spirit with their own. Michael Pisaro says the literal sense of Wandelweiser is change wisely; it is up to each listener, of course, to decide whether a given conversation realizes this, if you will, suggested imperative. 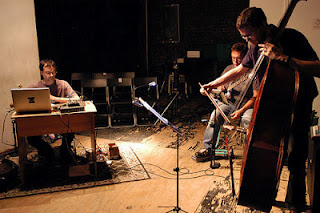 On September 1, 2011, the inaugural set of the 15 night/35 set AMPLIFY:stones music festival in New York presented a trio piece by Antoine Beuger created expressly for the festival; from a score entitled s'approcher s'éloigner s'absenter (ErstLive 009), the trio centered their sequence of actions around a few graphic guidelines from Beuger. For 52 minutes, Barry Chabala (guitar), Ben Owen (electronics) and Dominic Lash (double bass) swept the room with surges, suspensions and stillness, in apredetermined patterns that emerge and disappear with an improbable ease and intimacy. I have a copy of the score, and at Beuger's urging will reference it without specifics or reproduction. I mention the score to make the point that access to it only strengthens my regard for how Beuger works here, providing a situation in which the trio joins their sensibilities to his own. Beuger's score is redolent of the Buddhist tip for those who attempt the alert but relaxed state of attention called meditation, and invariably succumb to both hyper-alertness and snoozing - not too slack and not too tight, goes the instruction,  like the strings on a vina.  Lash, Owen and Chabala, to my ears, sustain a wonderful middle ground, whatever sorts of soundings occur, and the range of sounds is fantastic.

Beuger refers to scores this way - ...at their best they are confidential letters to musicians, who somehow are friends and know what you're talking about. Again, foregoing specifics, the score of s'approcher s'éloigner s'absenter offers the musicians certain actions and options to take, in whatever number and order they see fit. The trio quietly and fluidly interlace their sounds - ebow, arco, pizz and plectoral, soft computer trills and tolls, and, throughout, the recurrent subsiding to silence, to the room and to the assembled - with superb balance. The patterns that emerge are not of recurrent sounds, but of a sense of how sounds should be made. I love the feeling that sound is acting, Cage said, going on to say not talking at him. This might be as pith a way of saying how I hear this trio's work as any I can come up with; s'approcher s'éloigner s'absente acts on you, inhabits your space, never too slack nor too tight, telling you nothing.

Back, for a moment, to Frey's idea, the important conversation, which is a stream of 20 years or more now - what Chabala and Owen {and Michael Pisaro and Miguel Prado) bring to the conversation, (among many things, apart from this obvious technical aspect),  is the particular sort of tonal/timbral sustain afforded by their electronic realizations of Wandelweiser music; and what Lash does masterfully here is meld and merge his bass with the electronic frequencies in a subtle fashion, employing the mimetic sounding of reeds (remarkably, at times, saxophone-like), whistles, bird trills, and, gorgeously, wood and gut. Lash's work on the 2011 release Droplets,  particularly his realization of Eva-Maria Houben's Nachtstuck, alerted me to the architecture of sound he can draw from wood and string; on s'approcher s'éloigner s'absenter Lash reveals his acute sensitivity and touch in harmony with playing partners. I cannot say enough about this trio's interpenetration and balance.

In an interview last year with Simon Reynell, Lash, in his own fashion conveying the ongoing sense of the important conversation, said, ...the continuum becomes the whole of all possible sound...and any musical composition or performance is "cut" out of this material...music is made by a kind of carving out, rather than a building up from basic materials. It is stunning to hear improvising musicians carve out of a score the sort of living, breathing music discovered on s'approcher s'éloigner s'absenter. I was far from the room this occurred in one year ago tonight, but I am confident we hear Beuger, Lash, Owen, Chabala, the lucky attendees, and the spaces between joining in the important conversation - the creative questions about sound and silence asked by the Wandelweiser collective and their sympathetic friends - on this beautiful release.

Antoine Beuger's remarks on scores, from Poetry As Score

Dominic Lash's interview at Another Timbre