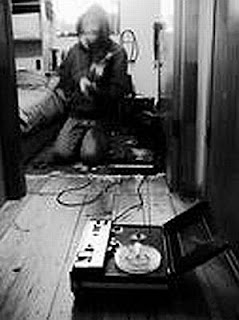 Che Chen refers to the two sides of his seven inch release on Pilgrim Talk, Pulaski Wave [Violin Halo]/Newton Creek Mirror Lag, as more like a kind of geography or weather than music. I can hear that in the mesmeric waves and pulses offered here, in the violin/tape-sourced throbs and undulations rooted in Brooklyn environments where Chen walks, gathering the intangibles his less alert fellows filter out as noise. References to Tony Conrad are inevitable- I'd suggest Vanessa Rossetto as an artist of a closer affinity. Chen serves up enough grist to the mill to thicken the plotted drone with tiny feedback squalls, intemperate pitches and the sort of cries and whispers heard when we attune our ears to our most familiar surroundings. 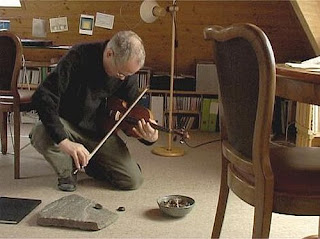 Jurg Frey's Metal, Stone, Skin, Foliage, Air, realized by the superbly subtle Austin-based percussionist Nick Hennies, is so ventilated and multi-faceted a piece, so encompassing a sonic environment, I can safely surmise none of your friends could imagine the sound when you tell them it is a 65 minute percussion quartet. 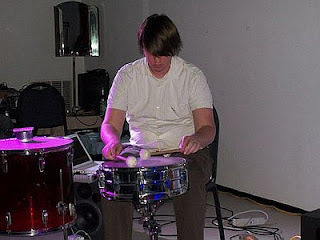 The piece was composed between 1996 - 2001, premiering in 2002 - there is little doubt, listening to this realization, that in the ensuing years Hennies gained the sort of intimacy with the work that makes, from my perspective, auteur-attribution [cf. some of Michael Pisaro/Greg Stuart's collaborations of the past several years] a little ambiguous. Pace much of the Wandelweiser work I am familiar with, strict time durations and other structural elements only support the sense of an organic shaking-out, as the piece comes to life through stages of insistent pulses, rustle and flutter, and [my favorite section, due in no small part to evincing Hennies' lovely recording of another percussion quartet, Radu Malfatti's l'effacage [2008] ], a deep, deep sonority that seduces and summons the ears from the core of the drum. 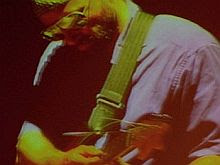 Abdul Moimeme, as I pointed out in my review of his work with Diatribes last year, is a guitarist mining the possibilities of a guitar approached as a sound-generator that happens to have a fret-board and an improbably long history. On Khettahu, Moimeme plays two prepared guitars simultaneously, in the busiest passages bringing to mind the startling cross-handed technique of pianist Borah Bergman. Moimeme's partner here, Ricardo Guerreiro, wields an interactive computer platform that enables him to capture and select Moimeme's output, reshaping and resending Moimeme's shards of sound, spatiality and synchronicity played, being co-equal elements to pitch and timbre. Their interchange is fluid, at times rivetingly so. What Moimeme brings to the work is a distinctly developed knack for the percussive potential in his hacked guitars, as often as not sounding sculptural, shearing rather than plectoral, sending great sparks and scraps of electricity to Gurreiro to refine or refuse. I hope a few more of you discover Moimeme's work for yourselves. 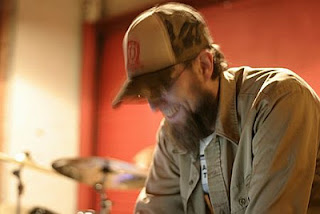 Inveterate Chicagoan Brent Gutzeit, whose work in his 18 year stint with T.V. Pow merits the hackneyed adjective prescient, and whom I regard as that tiny cartoon devil sitting at the left ear of us all, whispering into whatever musical mix he's involved with, fuck something up, released a couple of projects in late 2009 and 2010 that deserve a wider listen. Enemy, his duo with EVP maven Michael Esposito, is, and I say this confidently, irrespective of whatever has graced your player the past year, like nothing else you've heard. Esposito labors in the paranormal field of capturing ghost voices, integrating them, as base tracks, into collaborations with people like Kevin Drumm, CM von Hausswolff, and John Duncan. 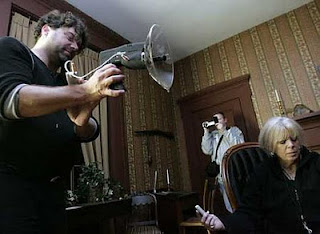 The project with Duncan was created from a visit to Duncan's childhood home, where the somewhat skeptical Duncan was startled to hear, via the 50's sci-fi era-looking equipment Esposito wielded, a spirit greeting him by name. Skeptics [count me in!] be damned, Enemy is an alternately unnerving and amusing ride, Gutzeit layering into the paranormal activity subtle striations of field recordings, guitar chordings, and the like. Near the conclusion of the piece, Rola Esposito is heard engaging in word prompts to an unseen voice, a creepy See-n'-Say exercise that evinced an involuntary shudder from this skeptic. Esposito owns a unique place in the terra incognita of outlier sound art; as early century cartographers had it, when labeling areas of maps with what lies just beyond the known, here be dragons. My wife will be relieved that this devilish duo is going back to the shelf for awhile. 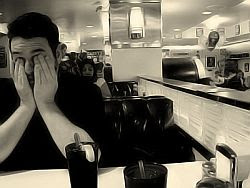 Gutzeit labored, as the title Five Years of Work For A Strange Result connotes, in a file exchange with Francisco Meirino [nee Phroq]. I was introduced this year to Meirino's duo work with Gutzeit, and the lovely Music For An Empty Cinema [with Jason Kahn]. While the latter is an enveloping work of steady-state-with-minute-particulars droneage, the back-and-forth with Gutzeit has passages of concrète that evoke Ferrari, with episodes of finely shaped noise, out-of-the-frame voice captures, and the sort of eructations, sonic ruptures and deceptive rests the finest musicians working with junk electronics can create. Five Years... is made all the stronger by the pair's respective approaches being swapped for reduction, reassemblage and respectful fuckery. 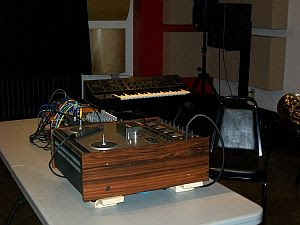 I am so taken with Minnesota sound artist Nathan McLaughlin's Echolocation series [pieces somewhat akin to Basinski's Disintegration Loops, in that both composer's unspool thematic material of both bell-like clarity and the smeared, indistinct sonics of decay that tape affords], that I asked him to bring another chapter of this area of his work to a show I presented earlier this year. McLaughlin obliged, despite the fact he has left this series behind, now working in entirely new areas. McLaughlin owns a near-phobia to having an internet identity, resides in a small farming community in Minnesota, and generally is in possession of a humility I've seldom encountered in working with musicians. I mention this as you are no doubt seeing his name for the first time, and so unaware of the especial pleasures his meticulous reel-to-reel compositions offer.

Notice Recordings, whose attention to the important details in producing cassette works places them in the company of Winds Measure and Tone Filth, among a few others, released Echolocation #5 earlier in 2011. While McLaughlin numbers the pieces, the enigma of their sequencing, about which we shared a laugh, remains - # 3 and #2 were issued in 2010, #5 this year, and # 4 and #1 are to follow. Whatever the relevance or irrelevance of this, Echolocation #5 extends McLaughlin's exploration of the elegiac and the dirge, adding some crunchy, roiling passages as well. Often McLaughlin's loops gather, in small enough increments to avoid overt, ham-fisted drama, a strong sense of the ominous. These tensions, as well as the fine structural drift McLaughlin is patient enough to permit, make the Echolocation series a fluid one, without a start or an end. Echolocation #5 should be heard as an installation in a big-hearted work, issuing from a musician with an immense gift for subtle music. They are sent from a recondite artist who may well disappear before you receive them, so there's no time to waste. 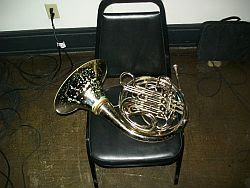 For the second time this year I get to draw your attention to the fine imprint Copy For Your Records, on which Anne Guthrie's work, Perhaps A Favorable Organic Moment, came out earlier this year. A strange brew of Scottish balladry, a warts-and-all essaying of a Bach cello suite on her battered French horn, and Guthrie's remarkable synthesis of traffic, room tones, pedestrian cacophony, and beautifully limned sine tones, this one eludes words as much as anything I have written about. Guthrie's work in this area [do yourself a favor, and locate a copy of her standing sitting, released in 2010 on Engraved Glass, another gift of treated field recordings] is highly intuitive, with a finely developed capacity for fitting together disparate sonic elements in a way I find disarming-somehow Guthrie gets right to the heart of the matter in her solo works, no dross or superfluities. She has, and this is my highest praise, whatever sound area is under discussion, very big ears; and, like the aforementioned McLaughlin, a big heartedness to her music.

Thanks for the compliments on the label, Jesse. And also, of course, on Nathan's series. I hope it receives continued attention from folks. I return again and again to his sounds. Looking forward to 1 and 4 ...

Fantastic article in general. As always a very informative and engaging read. Especially appreciated the comments on Brent Gutzeit. His work and presence have always been very intriguing to me.

As a side note, to those who read this, that Echolocation #5 tape is still available from us--in a small quantity--so please get in touch if you're interested : noticerecordings [at] gmail [dot] com

All the best to all and please enjoy November.