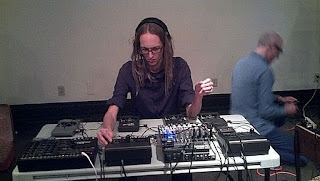 the medium is the message

I want to get after you all a little to look into the music of a tape composer from Bowling Green, Ohio; Jason Zeh has been focused for some years on making intimate, meticulously crafted sound works by every means possible within the medium of cassettes. He has looped, posted, manipulated, burned, frozen and punctured magnetic tape in compositions that, should you give them your close attention, reveal hermetic, muted worlds of endless, super-saturated detail and activity. Zeh's skeins and spools of sound almost always play out around a hushed, submerged column of smokey droneage, Zeh bending, warping and mangling the details as they appear and float away.

Magnetic tape has conveyed musical content for so long, the lineage of musicians who have turned their sights and manipulative hands on the medium itself are really few and far between [Zeh's contemporaries, limiting the field to instrumentation, are most notably Howard Stelzer and Stephen Clover, a.k.a. Seht]. Zeh shares aspects of an overlapping sensibility with Jason Lescalleet and, specifically in his predilection for nearly entombing rich sonic details in tape-murk, Graham Lambkin.

I heard Zeh in 2005 in a crappy record store/head shop, where a sparse audience crowded around as he knelt on the floor and let loose a deftly orchestrated, improbably structured wall of cassette-generated noise, his hands flying between [as memory serves], seven or eight cassette machines of self-evident low-fi status, working without any apparent fuss or faltering. Six years hence I was fortunate to present a set of his current work in my 2011 concert series. I am pleased now to urge you to hear two of his duo releases from earlier in 2011 and late 2010, respectively Circulation Decay, with Blake Edwards, and the stunning Dots, with Ben Gwilliam. 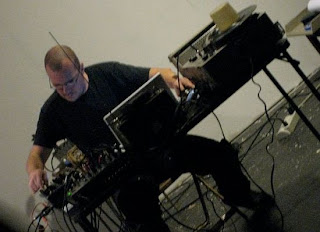 Circulation Decay, a 37 minute work that essentially follows along the schema I referenced above - an at times barely discernible spine of steady-state tonality is entwined, encrusted and pleasantly corroded with the duo's fine sonic grit, loopy and, eventually, chugging and roiling to its terminus. It is [and more and more I see why my esteemed fellow Brian Olewnick makes a point of this in this age of "well, a CD holds 80 minutes of space, why not fill it?"] of a near-perfect duration. Edwards, who has performed for many years in noisier realms as Vertonen, is a stellar partner here - a bit of a stretch, perhaps, but ErstLive 004, involving Fennesz and Pita come to mind, in terms of musicians who can blast florid and full-frontal, bringing restraint and exacting sound choices to the table. 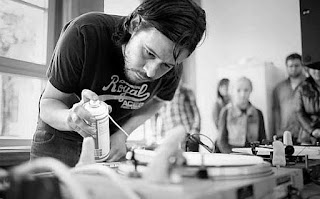 Zeh's duo with Ben Gwilliam, Dots, was one of those Extrapool residencies in the Brombron series that provide funds, time and material resources for selected musicians to make shit happen. Zeh and Gwilliam didn't waste a dollar or a minute, judging by the 45 minute textural study here. Dots is a work of considerable subtlety, exploiting the surface and substrata of tape itself, peaking here and there from an ultra-quiet baseline with furnace blasts of noise, banking down again to move, slowly and surely, to its last rasp. This is an assured sounding work, and its commission, happily, provided the pairing of clearly simpatico minds and energies. Darkly cast, intimate as a whisper, I may well cheat and place Dots on my Best of 2011 list. 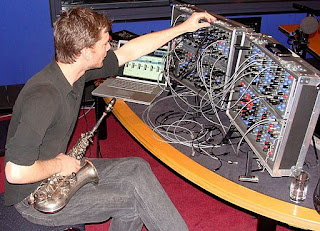 Thomas Ankersmit released one of 2010's most auspicious records, Live In Utrecht, remedying at least a little the scarcity of available recordings of his saxophone/analog synth investigations. He returns in tandem with Valerio Tricoli on Forma II, on Bill [a.k.a Family Battle Snake] Kouligas' Pan imprint. 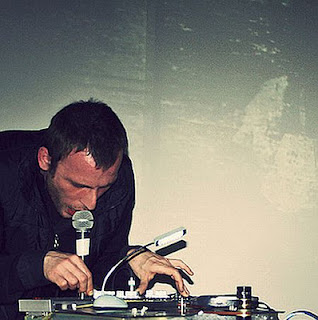 Tricoli has expressed a frustration familiar to musicians who deal with provincialism in their search for like-minded musicians [in this case, in Tricoli's native Palermo] with whom they might collaborate. He has struck sparks and seemingly inexhaustible ideas with Amsterdam native/Berlin ex-pat Ankersmit. The duo's spacey sound world has great range, at times crepuscular, at other's explosive, and - goddamn, it reminds me of the admonishment of the zen teacher who said to the nascent haiku writer, when you see lightning strike, don't think, enlightenment! - it is highly evocative of starry fields and twinkling satellites. The heliocentric worlds of Tricoli and Ankersmit join together Teufelsburg's radar station, analog sub-tonics, sonic squelchs, bleeps and other other-worldly pitches, assembled, refined and propelled with real elegance. However many their materials, the music here never sounds cluttered or claustrophobic.

The album concludes with a piece perversely disparate from all that precedes it, and to my ears, to great effect. Ankersmit layers, and layers, and layers his caterwauling sax lines, braiding them like Niblock, but looser, occasionally perturbing the reedy droneage with the introduction of yet another unstable, ear-scouring held horn tone. I don't know if Tricoli has a hand in this one - I heard it, at first blush, as Ankersmit's homage to Niblock, with just enough sour notes and scary keening to distinguish it from Niblock's reltively smooth, refined, antecedent work in this area. It is Ankersmit's exultant, cracked coda to this duo's fantastic outing, a pairing I hope will be revisited.

Remarkably mastered by Rashad Becker, Forma II is a jewel. 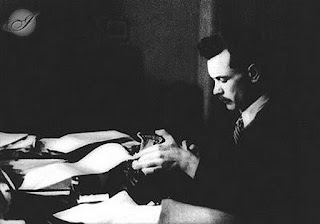 ... a denser gloom
Even now is being produced. It sets
A foundation for silence.

~ Attila Jozsef, Night On The Outskirts

I have encountered a composer of auspicious talent who has maintained her anonymity so well, I am given to posting a photo of the Hungarian poet Jozsef [who suicided at 32, linking him to an early 20th century great poet's [Mayakovsky, Yesenin] version of the dead at 27 club of our time]. With any luck at all, I will clarify why Jozsef's visage and poem fragment sit atop a few words about Anett Németh's terrific release on Another Timbre, A Pauper's Guide To John Cage.

Part of Simon Reynell's Silence and After series, works curated from the younger, current fold of musicians influenced by Cage and [clasp!], reductionist-improvisation, A Pauper's Guide..., it is safe to say, came out of nowhere. You can try in vain to learn anything about Ms. Németh, as I did in preparation for this piece, and come up empty-fisted. Nothing wrong with being sent solely to the music at hand, however frustrated my predilection for learning what I can about its creator.

A Pauper's Guide... consists of two pieces, 27 and 17 minutes respectively; the title work, for piano, clarinet, field recordings and household objects, realizes a simple idea - the piano track was laid down as the backbone for the piece, while chance operations were used to determine the time brackets for the other sounds. The resulting connections and collisions are Németh's obvious nod to Cage. In her interview with Reynell, Németh recalls Christian Wolff's averring that two sounds that initially sound incongruent together, heard repeatedly, will come to sound congruent. Well, set that alongside Cage's famous if something seems boring the first time, rinse/repeat/rinse/repeat will reveal that in fact nothing is boring maxim, and you have sufficient fodder to turn any music forum thread into a conflagration in no time.

The household objects and low-fi electronics Németh employs here, as she states in the interview, gave rise to the piece's title - use what's around you and available for free...the means for producing this music were so simple and meagre. I don't hear meagre at all - A Pauper's Guide... develops with striking confidence and clarity, and the sourced objects are skillfully integrated so as to not draw attention to themselves. Composing, Németh says, is partly about struggling with...mundane material. While hardly sounding impoverished for its materials, the piece does sound like an elegant assemblage of quotidian stuff; the piano and clarinet no more privileged than whatever Németh rummaged from her pantry or attic, or the field recordings that yield passing autos and the recondite whimper of a dog. In this piece, with these materials embodying Wolff's maxim, I hear a kindred spirit to Michael Pisaro's work.

The second work, Early Morning Melancholia, might be heard as the antithesis of the Cageian elements of the first. As overtly emotive as the title suggests, Németh's manipulated recordings and everyday electronics are unapologetically affective, albeit the emotions of fugue states. In fact, a sort of dissociative drift is the flavor I get, and this leads me to the Hungarians, Attila Jozsef and Bela Tarr.

Early in my listens to Németh, I scribbled perfect for a Bela Tarr film. I subsequently learned that A Pauper's Guide... comes with a quote from the poem cited above. I did not know this, as the review copy I received has no poem fragment included. At this writing, I don't know what lines are quoted from the Jozsef poem [I couldn't find them in an internet search], which is quite long. O.k. - I hear Németh's music as evoking Tarr's similarly languid, melancholic imagery, the poet she chose to reference is another depressive Hungarian, and I can turn up nothing about the composer, so you get a photo of Jozsef, and the three lines I think might make sense if you get a hold of this impressive work for yourself. Németh's foundation for silence is a dense atmosphere, perhaps not of gloom, but close - for me it's above all sad music, she says. It is, beautifully realized. I think I should just keep on with whatever feels interesting to me, Németh says ending the interview.

Ms. Nemeth responded to my piece via email, and consented to my posting some of her words here; for this I am grateful, as the boundaries she sets around what she regards as extra-musical matters are clear. I find her thoughts and approach interesting, and thought some readers might as well.

I apologise that I am late in responding to you, but I do not look at my emails every day. Simon Reynell told me that you wanted to write a critique of ‘A Pauper’s Guide to John Cage’ and ‘Early Morning Melancholia’. Simon was keen for me to become involved in your researches, and sent me some examples of your writings. I see that you have already posted your critique and I am very content with what you say. I do not wish to appear secretive so perhaps I should have sent you some informations, but in truth I talk about my music only with hesitation and difficulty. Music is something that I do ‘for fun’ in my free hours, if I have enough energies left. I am not a professional musician, and have never trained as a composer, and so do not have prepared thoughts or explanations for my compositions. I explained it recently to a friend that in the same way that I spend a lot of time thinking about politics, and get involved in small campaigns and signing petitions and so on, but I do not call myself a politician, or want to be considered as one. So with music - I think about it a lot, and spend a small time playing with composing pieces, but I do not think of myself as a musician, and do not want to be considered one.

I hope you understand this and are not annoyed that I did not respond sooner. But thank you for your kind critique.

You are right that the poetry of Attila József is close to me. The lines that were cited on the CD cover were these lines from ‘Night on the Outskirts’:

Slowly the night’s net is lifted

out of the yard, and the kitchen

the shadows, the branches

of a fallen tree.

The dust on the road grows heavy.

Beautiful words from one depressive Hungarian to another!

Wow, I picked up the Zeh/Gwilliam cd today for the first time in a while and thought to myself that it should be on some best-of-year lists. Too bad those cd's seem to have kinda lousy circulation.

is this the kud?