a variety of matter both of judgment and delight


But, gentle reader - to conclude, although abruptly, this work of mine, which I have here published, and contains such things as I myself have thought well of, as being in my opinion furnished with a variety of matter both of judgement and delight, which willingly I refer to the friendly censure, and the approbation of the skillful.
~ John Dowland, A Pilgrim's Solace, 1612

John Dowland, a beacon throughout my life, the music I liked to play most during my classical guitar period. My Dowland mainly refers to the atmospheres that the English composer sparks within me. You know the feeling you don't know. Quotes or adaptations from Dowland, like fragments of memory from a far away world.

Dowland was suffering the slings and arrows of some of his contemporaries, when he published A Pilgrim's Solace, the text to his final book of songs. Mocked by his detractors for composing for the inferior lute, Dowland responded with more than one hommage a moi himself, to say nothing of a body of work that, along with his contemporary Thomas Tallis, articulates like no other music a zeitgeist, or as Stangl has it, an atmosphere, of tener duende. 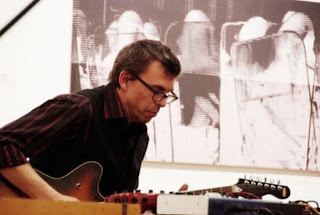 No doubt Stangl's intention in titling his 2011 3 CD / 16 page booklet / DVD / 496 page book (German edition only) Hommage a moi was irony, unlike the beleaguered Dowland. With 25 tracks, and nearly 3 1/2 hours in length, a charge of hubris might seem legitimate. What is on offer here, however, is an improbable range of works from 1993 - 2009, a period of fecundity and wildly diverse compositional approaches. I am confident that most of the 25 works here are almost wholly unknown to those whose entree to Stangl's sound-world was the electroacoustic improvisations / compositions of Efzeg, Polwechsel, and his stellar contributions to the Erstwhile catalog. What pervades much of Stangl's music across time, instrumentation and stylistic range is an atmosphere of the lachrymose,  and a predilection for silences, suspensions and the still-point that bring to mind Feldman. He has, naturally, composed pieces entitled My Dowland and My Feldman.

My entree to Stangl's guitar work was in 1987; a local improvising musician, who had previously turned me on to a quite different slice of Viennese improvisation via the skronking axis of The Masters of Unorthodox Jazz / The Reform Art Unit, pointed me to Ton-Art. Morphing across several records from a sextet to an octet, including bassist Werner Dafeldecker, and anchored by Stangl's compositions and guitar work, Ton- Art mashed up 12-tone rows, free jazz and the Third Stream thing. At the same time, on the same label, I was hearing Stangl on Franz Koglmann's records, so my Stangl was a guitarist with  an inspired facility for quick-edit change -ups, confounding technique, frequently blazing soloing, and anarchistic humor.

I lost track of Stangl's output until 2004, when I discovered two of his releases on Erstwhile - eh, his duo with dieb13 and Schnee, another duo, this one with Christof Kurzmann . This was music as distinct from the florid and febrile output from the 1985 - 1995 Ton-Art / Koglmann period as might be imagined. Stangl had become a super-focused improviser, alternately as spare and purposeful  in his note selection as Feldman, and just as deftly capable of smearing the air with noisy textures and blurred, bent chords, always acutely attuned and responsive to his playing partners. I actually returned to the jazzier dates to be sure this was indeed the same fellow, imagining I had conflated him with someone else in the fog of that decade. I would subsequently work my way back from those dates through Stangl's varied work with Polwechsel, Efzeg, his superb duo with Sugimoto, and his involvement with the 2002 Amplify festival.  His 1998 opera Venusmond, with ensemble members like Kevin Drumm, Radu Malfatti, and Jim O'Rourke, and a libretto by the poet Oswald Egger (whose poetry has been translated from the German by someone familiar to these pages, Michael Pisaro), was once performed in part atop the Empire State building.

Stangl has also published papers on a variety of subjects, chiefly pertaining to the impact of recorded sound on societies, with a special interest in the gramophone and shellac records (which, interestingly, were a crucial element in Stangl's collaboration with dieb13 on the fantastic eh). He has written at length about fellow Viennese ethnologist Rudolf Poch ( in his book Ethnologie im Ohr); Poch (1870 - 1921 ) was an early explorer and innovator in the area of synced sound and ethnographic film, producing haunting footage of the same as early as 1907. Stangl's consideration of Poch's ground-breaking work explores the latter's omission from discussions of cultural phonography due to Poch's involvement in eugenics.

He remains among my few favorite guitarists,  chiefly for his tone and touch; as a composing and improvising musician, I prize in his varied works a quality he articulates as  a reconciliation of experiment and tradition. He was referring specifically to his song-based project with Kurzmann, Schnee, but might well be describing much of what is found on Hommage a moi.

This music, this system of separations, leaves you thinking about a physic, whose starting point would not be the separated atoms, but tears.
~ E.M. Cioran

There is that affinity for Dowland in quite a few of the pieces found here, a melancholia Stangl likes to juxtapose against any number of players, in both the intimacy of duos and trios, and the complexity of his writing for large ensembles. On breathing / clouds, recorders and voices amass in, well, clouds of fragile aspirations, the voices dulcet and sorrowful. Angels touch sets that spirit of duende in a context of electroacoustic density and noise, and the spirit holds its own. Ronron, for vibraphone, was a revelation for me, as fine a presentation of space, silence and tone decay for the instrument as anything by Walt Dickerson. Trio No. 1 fits perfectly within the Wandelweiser catalog, a lovely hush and poise maintained in the air between Malfatti, Stangl and banjoist (!) Gunter Schneider. In larger settings, such as Concert For Saxophone and Quiet Players, John Butcher easily floats above the collective sound of an ensemble that includes Billy Roisz, dieb13 and Stangl, such is their restraint. The Concert For Trombone and 22 Instruments similarly finds Malfatti ensconced in a nexus of sustained quietude, in which he is the most clamorous voice to be heard (I am wagering he might well distance himself from this 1994 work).

Not all the offerings stay in the ultra-quiet end of the continuum associated with Stangl - the Madrigal piece in Three Pieces For Organ is a break-neck flight for pipe organ reminiscent of John Adam's Short Ride In A Fast Machine. There's a picture is a T.V. Pow remix characteristic of their brilliant mischief. Noiset No. 1, Stangl's thrashing duo with Klaus Filip, bears its title out via pick-ups, boiling water and ppoll (that last being Filip's innovative software).

There is a brief, fetching series of sound-studies for trumpet, played by a 15- year old boy whom Stangl informs us had as his first practice instrument Franz Hautzinger's red trumpet; new experimental music is very easy for young people if discovered independently by them, Stangl writes. In this fond observation (Stangl tells us he has enjoyed the lad coming to practice with him for several years), the musician's intention - a reconciliation of experiment and tradition - is felt. In his hommage, despite its title, Stangl evinces his beacons Dowland and Feldman; but additonally, in his varied and selfless compositions, he pays tribute to every musician he works with.

A highly informative review. Thanks for all the detail.